Obituary: Peter Sweeney will be best remembered for his vivacious performances to 30,000 children annually for 27 years 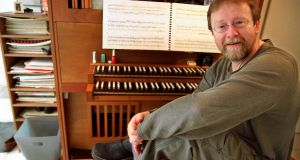 The second of two sons, Peter Sweeney grew up in the Dublin suburb of Ranelagh in a family already steeped in musical talent. His paternal grandfather was a traditional fiddler and his maternal uncle, Edgar “Billy” Boucher was an organist at Christ Church Cathedral and head of music at BBC Northern Ireland. His elder brother, Eric Sweeney went on to become a composer and head of music at Waterford Institute of Technology.

Following primary school at Sandford Park, Dublin, Eric and Peter attended St Patrick’s Cathedral School. As a boy chorister, Peter sang in all the cathedral services which ignited his passion for organ music. In an interview with The Irish Times in 1998, he said, “I adored being in the cathedral . . . the calm, the silence and the wonderful architecture.” In fact, he used to climb up and play the organ without permission – until he was caught and sent for formal organ lessons with the organist, Sidney Greig and piano lessons with Mary Ellision at the College of Music.

From 1970 to 1974, Peter Sweeney studied music at Trinity College Dublin. Following his music degree, Peter declined a scholarship to Lubeck in Northern Germany [the home of great Danish-German organist, Dieterich Buxtehude] and instead opted to study at the Conservatoire de Musique in Geneva under the Swiss organ virtuoso, Lionel Rogg. There, his talent was recognised by many awards including the top performance award, Le Prix Otto Barbian.

His children, Nicky and Richard were born in 1975 and 1978, following his marriage to Vanessa Groocock in 1972. Nicky Sweeney is violinist and assistant leader of the Irish Chamber Orchestra. And, Richard Sweeney, who now works as a web designer in Sweden, played the theorbo (base lute) professionally for many years.

In 1978, Peter won the second prize at the Manchester International Organ competition. He subsequently performed on some of the most renowned organs in the United States, Canada, Europe, and China. He once said that “organists are the most unappreciated of musicians . . . but the local organist is often acknowledged by professional musicians as their earliest source of inspiration”.

Peter was a senior lecturer in organ studies at the DIT Conservatory of Music where he directed a weekly series of recitals, recorded by RTÉ Lyric FM. He was organist and director of music at Christchurch Cathedral for 11 years and in 1984 a new organ was built for him at Christ Church Cathedral by the Irish organ builder, Kenneth Jones. He was the founder and artistic director of the Dublin International Organ Festival.

For many people though, Peter Sweeney will be best remembered for his vivacious performances to 30,000 children annually for 27 years alongside conductor, Gearóid Grant and tenor soloist, Emmanuel Lawler for The Irish Times Music in the Classroom collaboration with the RTÉ Symphony Orchestra and RTÉ Concert Orchestra. A close friend since college days, Grant said, “Peter was quite the showman and comedian. He sought perfection in everything he did (even the bad things he did brilliantly!) But above all his talents – the best was that he could make children laugh.”

In 1989, Peter Sweeney and Helen Roycroft, the head of music at King’s Hospital School, Dublin began a relationship. The couple built a stunning mews house at 3 Louis Lane, Rathmines for which architects, McCullough Mulvin received a special mention in the Architectural Association of Ireland awards in 1999. They sold the house in 2004.

Peter had a keen interest in psychology and philosophy but his great passions, outside music, were architecture and design. Well connected, lively, impulsive and generous, he also suffered greatly from bipolar disorder. He retired from performing and lecturing 10 years ago. And, as his mental health further declined, he withdrew from commitments to adjudicate and compere at festivals.