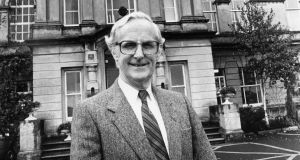 Michael Mulcahy, psychiatrist and internationally renowned figure in the specialism of intellectual disability has died at the age of 90 following a short illness. Dr Mulcahy held the position of medical superintendent and chief executive officer at Stewarts Hospital [now Stewarts Care], Palmerstown, Dublin for 27 years. Inspirational to colleagues and personable to residents, he was appreciated for his kind and progressive approach at a time when stigma and lack of ambition for people with an intellectual disability was the dominant culture.

From the 1970s, Dr Mulcahy spearheaded the move from institutional care to community houses which resulted in the building of more than 20 bungalows for people with intellectual disabilities in the grounds of Stewarts Hospital in the early 1980s. He was also instrumental in expanding day services, establishing a school of intellectual disability nursing and setting up a multidisciplinary assessment clinic. Keen to raise funds for such projects and draw attention to the groundbreaking work, he invited Mohammad Ali and members of the world champion Brazilian football team to Stewarts to meet residents while they were in Ireland for sporting events.

Dr Mulcahy was president of the International Association of Scientific Studies of Intellectual Disabilities for many years and he was particularly proud of bringing its conference to Dublin in 1988, attracting up to 1,000 delegates from around the world. As division chief of the Medico-Social Research Board [later amalgamated with the Medical Research Council to become the Health Research Board], he carried out epidemiological studies into various types of intellectual disability including Down syndrome.

A staunch nationalist, he was proud of setting up the precursor to the Irish College of Psychiatrists, breaking away from the UK’s Royal College of Psychiatrists. He also developed post-graduate training in intellectual disability for psychiatrists in Ireland and worked with the World Health Organisation to improve the conditions of care for people with disabilities around the world.

In Ireland, he developed the National Intellectual Disability Database (1995), which would allow for the planning of specialised health services for people with intellectual disabilities.

The third of four children of Dr Daniel Mulcahy and his wife, Josephine (nee Delaney), Michael Mulcahy was born in Perth, Australia. His parents had Irish roots and when his father died at the age of 33, his mother returned to Ireland, remarried and settled in Ballinakill, Co Laois where she had a third daughter, Judy. Following his early education at Killashee junior boarding school in Co Kildare, Michael and his brother, John (who would later become owner and editor of the Phoenix magazine) went to Clongowes Wood College in Co Kildare. However, Michael left school early and independently completed the matriculation for University College Dublin to study medicine, graduating in 1953 with honours and medals. He then worked as ship’s surgeon with the merchant navy and the P&O shipping line, travelling around the world twice.

In 1956 he took up an internship in general medicine at Johns Hopkins University in Baltimore and when sailing to New York to take up the job, he met his wife to be, Joan Callan from Carrickmacross, Co Monaghan. Two years later, their paths crossed again and the couple married just a month afterwards in New York in April 1958.

After a brief stint back in Ireland when their first daughter, Maria, was born, the family travelled to Saigon where Dr Mulcahy worked as a general physician for an American construction company. In his spare time, he set up a clinic for hill tribes, where he once donated his own blood to save a woman who was bleeding to death. Much later, he returned to Vietnam as part of an Amnesty International team to assess the mental health of prisoners held by the communist regime. In 1979 when Ireland agreed to take “boat people” from Vietnam, he arranged long-term accommodation for a small group of refugees.

Dr Mulcahy began his specialist training in psychiatry in the US and completed it in St Vincent’s hospital, Dublin in 1962. Back in Ireland, he worked briefly as a GP before travelling to Iraq and the US for work. With plans made to move to Sacramento, he changed his mind and accepted a job in Cork with the Brothers of Charity to set up the first diagnostic clinic for children with learning disabilities outside Dublin. For the next nine years, he travelled the country carrying out diagnostic assessments for children with intellectual disabilities.

In the late 1960s, he returned to Dublin to take up his post at Stewarts Hospital. In his latter years, he was a special advisor on intellectual disability to the Department of Health where his work included the drafting of the Mental Health Act of 2001. He sat on the Criminal Law Review board to review the care and treatment of patients detained in the Central Mental Hospital and was also a member of the Parole Board and the Adoption Board for several years.

A well-read man with a quiet disposition and a good sense of humour, he enjoyed horse racing and watching everything from rugby to cricket. He maintained strong ties with family in Australia. Dr Mulcahy continued to work until months before his death and he bore his final illness with dignity and courage.

Dr Michael Mulcahy is survived by his wife, Joan, their children, Maria, Daniel, Orna, Andrew, Elizabeth, Lucy and Sybil, his sister, Judy and grandchildren. His siblings, Peggy, Deirdre and John, pre-deceased him.