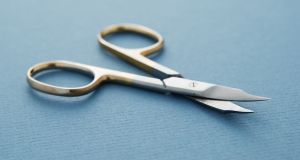 My mind flooded with images of old people all trying to bend over their knees with little scissors to clip their nails. Photograph: iStock

I was in Carrick Kitchens last week because a door fell off one of the presses in the kitchen and I was wondering if they could put a new one on.

No problem, they said.

Then I went to the post office and put a cheque into my account. The money was a refund.

Last year I paid a booking fee on a small cottage in Donegal, because I was dreaming of spending the remains of my life by the sea. But when I got the heart attack my earning capacity shrank and I couldn’t complete the deal.

I pushed the cheque across the counter and chatted with the teller about the lovely weather.

Then I walked the footbridge across the Shannon, as far as Lunney’s Service Station for a coffee, where I met a retired nurse who lives in a remote part of Roscommon. She was getting petrol.

“It’s the weather,” I suggested, pointing at the blue sky.

I inquired after her health.

“Well,” she declared, “if I see one more flying toenail, I’ll scream.”

“I’m not following you,” I confessed.

She explained that since she retired, she keeps an eye on a few of her neighbours. Elderly men who live alone.

“One of the things I end up having to do,” she said, “is to cut their toenails.”

Instantly my mind flooded with images of old farmers, shop assistants, and truck drivers, all trying to bend over their knees with little scissors to clip their nails.

“I thought people did that for themselves,” I remarked.

“Not if you’re old and have a bad hip,” she said. “And in Roscommon everyone is getting old.”

Personally speaking, it’s amazing that I’ve gone through life without cutting anyone’s toenails. I cut the fingernails of a Tibetan lama once, when I was in Mongolia almost 20 years ago. He was a highly revered monk, and he just handed me a scissors one afternoon when I was idle. Idleness is not something that impresses Tibetan lamas. But at least he didn’t ask me to attend to his toes.

‘They all have toes’

I was still thinking of toenails in Aldi an hour later, as I watched farmers in working boots standing in the queue and a woman with an infant in her trolley, strolling around the vegetable area in high heels. They all have toes, I reminded myself. And they will all grow old.

Then I noticed a friend rummaging in a bin of tool kits. He moved with a stiff hip, because he’s on the list for a replacement.

“Too much hopping on and off the tractor for 40 years,” he explained. Nowadays he potters around in a work shed mending things that don’t really need mending.

I wanted to ask him if the hip affected him cutting his toenails, but I resisted the temptation.

Then as I walked back into town, I saw a man trying to get in the patio gate at the back of an apartment. He might have been a thief. Although he had a little leather bag, so he could have been the man who reads the electricity meters. But the electricity meters are all on the outside walls nowadays. So I decided to check him out.

“This is a back gate,” I explained. “If you wish to find the owner you need to go around to the front door and ring the bell.”

“Oh, thank you,” he said, speaking with a German accent.

I was still a bit suspicious. After all even in Germany people should know the difference between a wooden gate to the backyard, and a front door.

“Every apartment,” I said, “has a front door with a bell on it. And a letter box, for putting in letters.”

“Were you looking for someone in particular?” I wondered.

“I am distributing invitations to a party,” he declared.

“Ja,” he continued, “I have the invitations here, from Jesus Christ.”

And suddenly he sprung a leaflet on me that offered salvation, for free.

Which astonished him. But it was true. Not by any religious mentor; but the man with the broken hip and the woman who cuts toenails for her old neighbours, and all the other folk I met that morning had saved me from myself once again, and from my own melancholy, for yet another day.

‘Simon Coveney asked me for a spin’: Readers on their crazy coronavirus dreams
9