Wax figures of the Duke and Duchess of Sussex have been moved from other members of the Royal Family at Madame Tussauds, London. The museum made the changes following the couple's statement that they are to "step back" as senior royals. 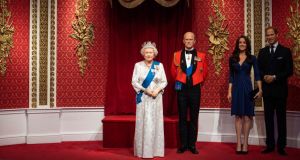 Wax figures of Meghan Markle and Prince Harry have been removed from the royal set at Madame Tussauds in London. The museum has separated the duke and duchess of Sussex from the rest of the British royal family following the couple’s bombshell statement that they are to “step back” as senior royals.

They plan to divide their time between North America and the UK to carve out a “progressive new role”. Senior members of the royal family were disappointed by the move, a royal source said. Wax replicas of the pair previously stood next to Queen Elizabeth and the duke of Edinburgh.

Steve Davies, general manager at the attraction, said: “Alongside the rest of the world we are reacting to the surprising news that the duke and duchess of Sussex will be stepping back as senior royals. From today Meghan and Harry’s figures will no longer appear in our royal-family set. As two of our most popular and well-loved figures they will of course remain an important feature at Madame Tussauds London as we watch to see what the next chapter holds for the them.”

Meghan has returned to Canada as the queen and other senior royals ordered their teams to find a “workable solution” to Harry and Meghan’s future roles. The couple had only recently arrived in the UK after spending an extended festive break in the Commonwealth country, but she is now back with the couple’s baby son, Archie, who remained behind, reportedly looked after by a nanny and friends of the duchess. A spokeswoman for Meghan said: “I can confirm she is in Canada.”

It is understood Meghan was always due to return to Canada after a brief return trip to the UK. A source said that “she came back to attend some meetings and then went back”. – PA, Reuters