One of the first to break decades of silence, she continued campaigning until her death 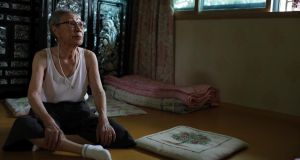 Kim Bok-dong: she never married or had children. “I have never known love in my life,” she said. Photograph: Woohae Cho/Getty Images

Kim Bok-dong, a former sex slave for the Japanese military during the second World War, died on Monday in Seoul aged 92. Her tireless campaigning helped bring international attention to the suffering that thousands of women endured.

Kim had cancer. Yoon Mi-hyang, president of the Korean Council for Justice and Remembrance, an advocacy group for the South Korean women who were forced to work in Japanese brothels, announced her death, at Severance Hospital, on Tuesday.

Since the early 1990s, Kim had been a prominent representative of the former sex slaves, who were known euphemistically as comfort women. She was one of the first women to break decades of silence and talk about what had been done to her, and she traveled around the world to testify about it – including at the United Nations.

Until her last days, she demanded reparations from Japan. When reporters visited her in the hospital, she accused Prime Minister Shinzo Abe’s government of refusing to atone properly. Historians say as many as 200,000 girls, from Korea and other Asian countries, were forced or lured into sexual slavery during the war.

“The last audible word she uttered before she died was actually a swear word that expressed her strong anger at the Japanese government,” Yoon said.

The news of Kim’s death resonated throughout South Korea. “She helped us have the courage to face the truth,” said President Moon Jae-in, who paid his respects at a mourning station established for her at Severance Hospital.

Kim was born in Yangsan, a small Korean town, on April 19th, 1926, the fourth of six daughters. Japan then ruled Korea as a colony; it had not yet been divided into North and South.

When Kim turned 14, Japan was at war in China. Conscripted by Japanese officials, she was told that she would be put to work in a garment factory and that her family would suffer if she refused, she has since said in numerous interviews. But she was forced instead to have sex with soldiers at military brothels in China, and later in Hong Kong, Malaysia, Indonesia and Singapore, until the second World War ended in 1945.

“On weekdays, I had to take 15 soldiers a day,” she once said. “On Saturdays and Sundays, it was more than 50. We were treated worse than beasts.”

When she returned to South Korea after the war, Kim hid her background out of shame, like most of the other former sex slaves.

In 1991 the silence around the issue began to break, soon after South Korea began moving from military dictatorship to democracy. That year, a woman named Kim Hak-sun became the first to publicly identify herself as one of the comfort women, with Kim Bok-dong doing the same shortly after.

In 1992, after Yoon met Kim, she described her as an unhappy woman who drank heavily and chain-smoked. Kim never married or had children. “I have never known love in my life,” she once said.

She proved to be one of the most outspoken, persistent campaigners for the women’s cause, which over time has won broad support in South Korea. In all, 239 of the women have come forward. Only 23 are still alive, most of them in their 90s. Another, a 94-year-old woman who was identified only by her surname, Lee, died just hours before Kim on Monday.

Japan has rejected the women’s demands for a formal apology and reparations. It says that all claims arising from the colonial era were settled in 1965, when Japan paid South Korea $300 million (approx €261 million) in aid as part of an agreement that established diplomatic ties.

Last year, Kim left her hospital bed in a wheelchair to stage a one-person protest

An agreement struck in 2015 between Abe’s government and that of Park Geun-hye, a South Korean president who was later impeached, was supposed to be a “final and irreversible” settlement of the matter, but its denunciation by Kim and other former sex slaves meant that it was all but dead on arrival. Under the agreement, Japan apologized to the women and expressed responsibility for their suffering, and it paid slightly less than $9 million for a foundation meant to care for the survivors in their last years.

But Kim and other survivors argued that the agreement fell short of official reparations and a declaration of legal responsibility on Japan’s part. Last year, Kim left her hospital bed in a wheelchair to stage a one-person protest in front of the foundation’s offices. Moon later decided to shut the foundation down.

Yoon said that some of Kim’s sisters had survived her but that she was not sure how many. – New York Times