‘Love just hit me on the head’: a romance rekindled after 42 years

Two teenagers fell in love in 1974. In 2016 a Facebook message reunited them 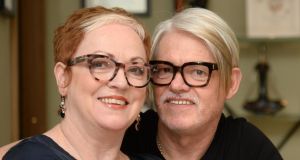 A teenage romance between two hairdressers in 1970s London culminated in a cross-continental wedding this week – 4½ decades later.

In January 1974 Dolores Mc Evoy, an apprentice hairdresser at Peter Mark on Grafton Street, began a course at Vidal Sassoon’s Academy in London. Peter Woodger had arrived from Australia only three weeks previously. He was a junior at Sassoon’s salon, around the corner on Bond Street.

“I walked in for a drink to the Hog in the Pound,” Woodger remembers. “The pub was busy but all I saw was Dolores sitting on a bar stool. I basically forgot who I was with. I went straight over, but was terrified to say anything to Dolores so I spoke to her friend first.”

He was big into glam rock. I went to meet him one night and he had more make-up on than I did

“He had his hair coloured and that was a box ticked for me,” recalls Mc Evoy. “The last thing he was was a suit and a shirt and a tie, and I liked that. The accent was intriguing, and there was an instant attraction because he was funny.”

The 17-year-olds quickly established their common ground of hairdressing and David Bowie, and arranged to meet again. Mc Evoy needed to catch her train to Kent, where she was staying with her aunt.

Soon they were together at every opportunity. “It wasn’t easy,” she says. “I was always running for the last train, the 11 o’clock, platform 5, Victoria Station. We’d go to a club called Crackers that played all the Bowie stuff, or the movies. We hadn’t much money – my parents were supporting me – so we just hung out a lot. We’d go to parks, traipse around King’s Road.”

“We were both into music and fashion, and we bounced off each other’s humour,” says Woodger.

“He was big into glam rock,” she adds. “I went to meet him one night and he had more make-up on than I did!”

Under the same roof

One highlight was 24 hours they spent together. “Peter asked if I could stay over. My mother only gave permission when she had talked to his mum, and had told her it was okay, ‘as long as there’s a floor and a wall between them’. He got the couch!”

“It was fantastic to have all the day, and to be there to say goodnight,” says Woodger. “She went upstairs and I obeyed my parents to stay downstairs. I just knew those stairs would creak, but also to me she was so special I didn’t want to spoil anything.”

But then it was over. “In the end, it was out of our control,” says Mc Evoy. “I was going home to Dublin. My career was just starting. He had a job and had talked about going back to Australia, and that was like going to the moon. My cousin drove us to the airport. We were holding hands, crying our eyes out.”

“I couldn’t believe how bad it felt. I’m actually getting all teary now even just thinking about it,” says Woodger. “It was horrible, just gut-wrenching.”

The heartbroken teenagers wrote for a while. “But an airmail letter took about three weeks. I was only earning £5 a week, so visiting Dublin didn’t seem possible. It just sort of fizzled out with time.”

Woodger returned to Melbourne. Over the following decades both married, and divorced. Mc Evoy had one son, Ian. Woodger had four, Jessie, Jeremy, Cory and Rusty, and is now a grandfather.

He often wondered what happened to Mc Evoy – “It was an unfinished story” – and even tried “half-heartedly” to find her while in London for training during the early 1980s. “I looked in the Irish phonebook, but when I got to Mc Evoy there was about 400 pages. As it turns out, it wasn’t the right time. If I had found her, and she had told me she had just got married, I would have never, ever, tried again to contact her.”

And her? “If there was anything about Bowie, like when he died, I’d wonder what Peter was doing now? And because I travelled so much back and forward to Australia over the years – two of my sisters were there – I would sometimes think about him. I actually drove by his house so many times without realising.”

“My kids had left home. My marriage had ended a few years earlier. I was turning 60 and I thought: What do I want from now on with my life? It’s really strange – and I don’t believe in what I am about to say – but I heard a voice ask, ‘Why don’t you look for Dolores?’ ”

He found her “in about five seconds . . . I went to Facebook search and typed in her name and instantly her sister in Melbourne’s Facebook came up. It was obviously a hairdresser’s profile. There was a Dolores Mc Evoy in the first few friends. I looked at the picture and said, ‘That’s her’! I think I messaged straight away.”

In Ireland Mc Evoy was just leaving for a wedding when the message arrived: “Are you the Dolores from Vidal Sassoon London 74?”. “It was signed Woody Peters. But as I was going up the stairs I suddenly thought, “that’s Peter Woodger!” She replied.

As they began to catch up on 42 years, they graduated to online chat, and then the phone. “When I heard his voice it was like being back sitting in that pub in 1974,” says Mc Evoy.

Woodger had brought a camera on one of the couple’s final dates, to Regent’s Park and the zoo. “When I was leaving he gave me a box of slides of that trip. I had always kept it. In one of our first conversations I told him I still had it, and he went silent. I think he was taken aback that he was somewhere still there with me.”

“I hadn’t expected anything to come of it, but I could feel that I was falling,” remembers Woodger. “We gradually told each other over one phone call that we were starting to have feelings for each other.”

The next step was to meet. That November Woodger arrived in Ireland for a short visit.

Mc Evoy admits to being “a nervous wreck . . . I didn’t know if standing in the same space it would feel as good, but it was perfect. We felt comfortable with each immediately. We went over to Westport, to neutral territory. We just laughed all the time. It had been a long time since I’d had such fun.”

That visit began two years of toing and froing across the world. Their respective clients in Dublin and Melbourne have followed the love story.

“They’d all come in asking: what’s next?” says Woodger. “It actually became the only topic in the salon. It must have been like dropping in every six weeks for the next instalment of a soap opera.”

So when did he decide he wanted to marry her? “To be honest, that first day I saw her in the pub. It was the same the second time when the Arrival doors opened at Dublin airport and I saw her. Love just hit me on the head.”

This box contains my heart. Please take me home and keep me in a safe place until later. Peter

When Mc Evoy first visited him in February 2017, he already had an engagement ring. He bought champagne and took her to an idyllic location, but then thought: I’m going to scare her away. So he wrote a note, put it in the ring-box, and handed it to her.

The note – kept in Dolores’s purse since that day – reads: “This box contains my heart. Please take me home and keep me in a safe place until later. Peter.”

“He’s so romantic, isn’t he?” she laughs. “But I did think it was too soon.” However, a year later, when Woodger proposed in a Melbourne restaurant on Valentine’s Day, it was an immediate yes.

Though still unsure where they will settle, Woodger moved to Ireland last year after both his parents died. Since reuniting with Mc Evoy, he discovered his eligibility for an Irish passport. “It was the icing on the cake. Before she passed away, my mum visited. We showed her where her father’s family had lived in Santry Post Office, and the Botanic Gardens where the family had worked.”

The couple now lives in Glasnevin near those gardens. Mc Evoy’s sister Áine, meanwhile, has taken over Woodger’s salon in Melbourne.

The teenage sweethearts were married in Victoria’s capital on February 7th. Mc Evoy’s son, Ian, walked her down the aisle. Her parents, who were unable to travel, picked the music and sent a speech.

“I still can’t really believe it,” says Woodger. “What still amazes me is that after a gap of 42 years it was just so instant when we got back together; how that incredible first love was still there.”

Minding my disabled daughter: 'I don't want to do this any more'
Real news has value SUBSCRIBE