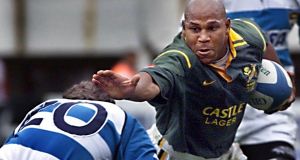 Chester Williams of South Africa breaks away from Felipe Contepomi of Argentina during a Test match in Buenos Aires on November 12th, 2000. Photograph: Fabian Gredillas/AFP/Getty Images

In 1994, one year after he had won his first cap for South Africa and become only the third non-white person to play rugby for the Springboks, Chester Williams, who has died aged 49 following a heart attack, was invited to the home of the country’s new president Nelson Mandela for lunch. The pair talked about the Rugby World Cup, which South Africa was hosting the following year, and the role the sport could play in helping to unify a nation after the divisiveness of apartheid.

Williams, a wing who rose to the top more through willpower and dedication than innate ability, became the poster boy of the 1995 World Cup, although a hamstring injury he sustained against Western Samoa in the build-up meant he was initially left out of the South Africa squad. He was called up for the knockout stage after Pieter Hendriks was suspended following a fight during the final group game against Canada. Williams faced the Samoans again, scoring four of his side’s six tries in a 42-14 victory. He then kept his place for the semi-final against France and, the only non-white player in the squad, played in the final against New Zealand at Ellis Park in Johannesburg, which the hosts won with a Joel Stransky drop goal in extra time.

Willliams’s image had been used on billboards to promote the tournament, but he was uncomfortable at presenting what he felt was a facade. He revealed in his autobiography, Chester (2002), that he was later racially abused during a provincial match by his team-mate on the other wing in the final, James Small. “The marketing men branded me as a product of development and a sign of change,” said Williams in 2002, two years after he retired from playing. “Nothing could have been more of a lie. I wasn’t a pioneer.”

He came from a family of pioneers, however. He inherited his love of rugby from his father, Wilfred Williams, who played for the Proteas, a team run by the South African Rugby Federation for non-white players that divided opinion in those communities because it had an inter-race fixture list. A versatile back, Williams snr played against the 1974 British Lions in Cape Town and against France the following year. An uncle, Adam Donbas, the brother of Chester’s mother Julene, captained the federation side in 1971.

As soon as he could walk, Chester was taken by his father to watch him in training, and when Chester was 17, the pair appeared together in a match for the local club Albions. Wilfred announced his retirement in the changing room afterwards, saying that when you appeared in the same team as your son, it was time to go.

The Proteas outside-half against the 1974 Lions was Errol Tobias; seven years later he became the first black player to be capped by South Africa. He was followed in 1984 by Avril Williams, another uncle of Chester’s, who played in both the Tests on England’s tour; the third black international player, in 1993, was Chester himself. He scored a try on his debut against Argentina and dedicated his jersey to his father. “I tried to idolise my dad and I dreamed of being a Springbok, even though in those days it was almost impossible to become one,” he said in 2015. “I kept on dreaming and through hard work and persistence I got the opportunity. I never really had the talent, but I wanted to achieve.”

Williams was born in Paarl in the Western Cape. He went to Klein Nederburg secondary school and captained the first XV there after his interest in rugby was rekindled by his uncle Avril playing for the Springboks. He served in the navy for two years before joining the army and played alongside Avril for the Defence club. He made his debut for Western Province in 1991, the first of dozens of appearances for the club, including two Currie Cup finals, and became such a popular figure there that it was suggested the side’s ground, Newlands, should be renamed Chesterfield.

He then joined the Lions super rugby team and finished his career in 2000 with the Cats, as the Lions were then known. He won 27 caps overall, scoring 14 tries. His coaching career from 2001 took in Uganda, Tunisia and Romania as well as the South Africa sevens team, the Cats and the Pumas. This year he released his own beers, Chester’s Lager and Chester’s IPA, which will be the only South African brews at the upcoming Rugby World Cup in Japan.

After meeting Mandela in 1994, Williams began an enduring friendship with the president: Mandela became godfather to his twin children, and the family continued to see Mandela in his final years when few were allowed access. “One of his mantras was, ‘It always seems impossible until it’s done,’” said Williams, after Mandela’s death in 2013. “He made us live that out on the pitch.”

He is survived by his wife Maria (née Robson), whom he married in 2002, by two children, Chloe and Matthew, and a stepson, Ryan, and by his father, a sister and a brother.