‘Dear Stay At Homes’ ... A letter from DJ John Peel to my husband 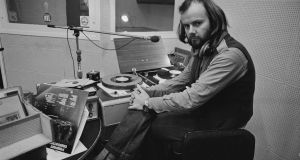 “Dear Stay At Homes, Thanks for sending me your tape to listen to. Thought it was very good too. I can’t play it on the radio because 1) we don’t have the necessary equipment 2) we’re not allowed to play demos by law. Something to do with copyright, I think. Why don’t you make your own record? I’d certainly play that. Lot’s of folks are doing it. Let us know what you’re doing anyway. Fat John Peel.”

My husband was rooting around in the bottom of the wardrobe looking for his long-lost dressing-gown cord. (The letter from cardiology said he needed to bring slippers and a dressing gown.)

Earlier that day, clearing out yet another tranche of yellowing papers from the boxes in the garden shed – old letters, drawings borne home in our sons’ small hands from forgotten playschools, a membership card for the Roxy in Covent Garden, the world’s first punk club – he’d found the handwritten note from the BBC’s John Peel, the legendary Liverpudlian DJ who, almost singlehandedly, promoted early punk rock on the radio.

“Maybe this would be a good time to finally release the single?” I suggested, looking at the letter, written on Radio 1 headed paper. Peel’s penmanship, which has somehow survived the long damp years, is remarkably fine.

“My last existing demo tape snapped,” my husband said, emerging from the depths. “I haven’t seen the singer or the drummer for decades, and the lead guitarist died a few years ago. Maybe I could use your dressing-gown cord?”

The Stay at Homes were a college band, formed in Canterbury in 1977, the year punk peaked (and pandemics were as distant as Pluto). The band’s diffident moniker, which was also the name of their first song, was supposed to be misleadingly benign.

“Look out of my window,

The band played a handful of gigs around the south coast of England, supported Cabaret Voltaire at Canterbury Art College, and then, at short notice, were offered a gig supporting Talking Heads, with the inducement of a regional tour to follow.

But just don’t invite me

My dressing-gown-cordless spouse was the band’s bass guitarist. There’s a photo knocking around the house of him on stage in a club somewhere: skinny, dark, in a washed-out T-shirt, playing a low-slung bass.

The proposed Talking Heads gig fell on the night of the drummer’s 21st birthday, the same night, as fate would decree, for which his parents had purchased tickets to take him to see the musical A Chorus Line in the West End.

The drummer, apparently unimpressed by the possibility of punk stardom, opted to go and see the musical, and the band’s big break bit the dust. The raging and disbelieving lead singer promptly broke up the band, someone probably slung around a few safety pins and cans of Watney’s, and that, my friend, was that.

Hardly a tale to rival Pete Best’s, I grant you, but in these strange days when many of us are literally and metaphorically clearing out some of the junk we’ve accumulated in our lives, it’s cropped up as a mildewed Spinal Tap memory.

The Stay At Homes’ lead singer went on to form a successful band called Swans Way, which had a hit single with the ethereal Soul Train in the 1980s. In the days before social media, however, most of the band members and other college friends drifted apart; lives formed, reformed, fell apart and were put together again.

“You can wear my dressing gown,” I said.

Driving back from the hospital, having dropped off the former bassist to have a tincture of heart surgery, I was stopped at the crossroads by a blue-eyed garda, inquiring as to why I was out and about so early on that muffled grey morning.

“I’m on my way home. I’ve just brought my husband to hospital . . . ” I could have gone on, I could have enumerated an entire, dishevelled, punctured history, but the young garda waved me through, advising to me to go home and stay safe.