Leo Varadkar: We need to be reminded of our soundness 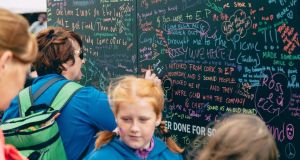 President Michael D Higgins and Taoiseach Leo Varadkar both sent letters praising a new campaign designed to create ‘a wave of positivity’ across Ireland. The #SoundEffect campaign was the brainchild of mental health advocacy group A Lust For Life. It urged people to focus on the soundness of people they encounter every day.

In his letter President Higgins said the campaign “highlights not only the many inspiring actions of people in Ireland but also the infinite possibilities - na féidireachtí gan teorainn-that present themselves when we work together and when people of all backgrounds and circumstances joining forces, choosing to support one another”.

The Taoiseach Leo Varadkar was similarly effusive about the idea that we need to keep the wave of soundness rolling, and the channels of communication around mental health open.

In the wake of Euro 2016, it was a combination of Sky News’s gloomy news stories and Irish football fans that originally inspired the campaign.

“The English fans were resorting to violence, while the Irish fans were being applauded for doing things like singing lullabies to babies on trains,” says Niall ’Bressie’ Breslin, co founder of mental health advocacy group A Lust for Life. ’ The idea came about because I remember thinking, ‘what if we focused on the positive more?’

Partnering with Pieta House, A Lust For Life came up with a premise that was brilliantly simple: to spare a thought for the good, the generous, the positive and the simply sound, at a time when negativity feels scant on the ground. And acts of kindness, from small random deeds to more ambitious gestures, go some way towards reminding us of the positivity in the world.

“The thing is that happiness is like Teflon that slips through our fingers and sadness is like Velcro – we stick to it and embrace it,” explains Bressie. “We watch Sky News or CNN and see nothing but negativity and fear mongering in the world. It’s becoming a much bigger part of our collective character, like ‘now I’ll just look after myself and screw everyone else’.”

In an initiative that trended online and then culminated at last weekend’s Electric Picnic, people – around 6 million at last count, say the organisation – embraced the #SoundEffect team’s call to arms. Many offered their ‘sound’ testimonies on the campaign’s Wall Of Sound installation, seen in the festival’s Mindfield Arena. The good news? There was no shortage of evidence to prove that, contrary to overwhelming popular belief, we’re a fairly sound bunch overall.

“Some of the testimonies (in the installation) were really moving,” recalls campaign strategist Kathy Scott. “One read, ‘my boyfriend helped put up my tent’, while another said, ‘my brother knows when I’m not feeling well, and asks me to talk to him about where it hurts’.”

Adds Bressie: “At the Picnic, there was guy on a tour bus who saw a girl crying in front of the gate because she lost her ticket and couldn’t find her boyfriend. The guy just took out an artists’ pass and handed it to her, and made her day.

“A standout moment for me was when three young lads came to the talks we held over the weekend. I’d spoken in their school a whole ago and they’ve taken it upon themselves to start a (mental health awareness) campaign of their own.”

“We put our shoulder to the wheel, and it was very much a case of ‘go big or go home’,” says Scott. “In the end, we went massive.”

When Bressie, Kathy and the other organisers of the #SoundEffect campaign set out to make the country a bit sounder, they likely had an inkling that the idea might just go down well. That Irish people – already harried by the vagaries of modern living – would embrace the opportunity to focus on positivity and kindness. Yet even they couldn’t have foreseen just how much.

It all started way back on a sunny August morning, the team, took to the street in the search for soundness. The stories they heard made them laugh and cry in equal measure. Moved by tales of small deeds of kindness to more ambitious gestures, the team decided to amplify their collective soundness by taking the campaign online.

Some mentioned having a shoulder to cry on during a rough time, others spoke of neighbours who reached out offering company. Others again doffed their caps to those who simply showed up with coffee and listened.

Radio presenter Adrienne O’Hora proves again that it’s the little things that make a big impact: “I had stupidly left keys in the door of the car, a man found them didn’t steal the car, called the guards and they retuned the keys to my house,” she says.

The campaign ended in a joyous weekend of candid conversation at the Electric Picnic’s Minefield, with an illustrious roll-call of speakers including broadcaster Miriam O’Callaghan, actor Jack Reynor and Health Minister Simon Harris.

“We were up against Duran Duran and Elbow and the tent was still packed,” recalls Scott. “In fact, having the talks backed up by Elbow’s music was pretty moving in the end. It really did feel like a home of sorts for those who needed some space to connect - to listen and to be heard.”

In the end, #SoundEffect engaged with millions of people not just in Ireland, but around the world. “Our vision was to create a wave of positivity – the SoundEffect hashtag providing a fulcrum for the human stories, actions and gestures that amplify our collective soundness,” says Chair and Acting CEO of A Lust for Life Paula McLoughlin. “The campaign was also based on a core belief that people are fundamentally sound – a message that often gets lost in modern society.”

The #SoundEffect conversation, says Bressie, is just the beginning. Plans are afoot for other awareness campaigns, events and talks, most notably around the lesser-known realm of dual diagnosis: being diagnosed with two mental health challenges.

“People think, for instance, that mental health problems and addiction can’t be treated at the same time,” notes Bressie. “It’s time we made people aware of people’s realities and give them the facts. Our strengths lie in coming up with creative ways of getting that information out there.”

The full letters from Michael D Higgins and Leo Varadkar on www.alustforlife.com and on www.pieta.ie