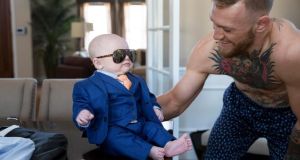 Unless you’ve been living in a nuclear spam-lined bunker, you’ll barely have escaped the posturing, the gymming, the panto face-offs. Whether you think it’s a crass grab for cash or a titan clash to be spoken of through the ages, Mayweather v McGregor is finally happening this weekend.

There’s plenty been said, both good and bad, about McGregor as a role model. But no-one can sniff at a trajectory that goes from fixing boilers in Lucan as recently as 2007 to burning Lamborghini rubber down Sunset Strip.

How did he do it? Want to have a go at living McGregor’s high life? We’ve pulled together a few pointers.

1.   Dress your son up for his confirmation, 12 years early

It’s never to early to dress like a Baggot Street bank manager. This week, as Conor Sr. put the finishing touches to his weekend wardrobe thanks to personal tailor David Heil, three-month-old Conor Jr also got kitted out in a three-piece suit, nicer than one you’ve ever had. Rounding off the outfit, baby Conor also wore leopard-print sunglasses (when in Vegas, do as the Hangover Baby does). Rumours that ‘burp me’ was threaded into the suit’s fabric, in the manner of Dad’s ‘f*** you’ suit, are unconfirmed.

If you do down to Dun Laoghaire harbour, you might just catch a glimpse of McGregor’s nautical pride and joy. The yacht is famously called the 188, after the amount in euros of his weekly dole payment before he found fame. It also takes pride of place on Conor’s Instagram account. ‘Rubbing in their face on the 188,’ is just one gleeful caption.

4.   Try some endorsements on for size

If you do one thing today, clear a minute or two to behold the bum-clenching glory of this ad for HiSmile (he must have lost a bet. He must owe someone a massive favour. They’re the only feasible explanations).

McGregor has come out of other product endorsements covered in slightly more glory. After being slapped with a fine for chucking energy drinks into the crowd at a press conference, he stumbled into a lucrative partnership with Monster Energy drinks.  Elsewhere, McGregor appears especially fond of plugging Beats by Dre headphones. The advert he stars in features a rake of young Dublin kids from St. Teresa’s gardens, and it’s actually pretty lovely. And with the balance between ‘eek’ and ‘aw’ duly restored, all is well in the world.

5.   Get yourself a Batmobile

Why get yourself a regular sports car when you get one that spits actual flames? After pimping his Rolls Royce with Mariah Carey’s greatest hits (true story), he dropped some serious coin on a Lambo Aventador LP 700-4, and about the only thing the car can’t do is say Mass. If you don’t have a spare €400,000, sellotape a Zip firelighter to your exhaust pipe* and see how you go.

A handy way to build on your own legend is to amass a gilded gang of acolytes. Why hang out with any old schlubs when you can talk about the vagaries of fame with Justin Timberlake, swap style tips with Jennifer Lopez, chat about the old sod with The Edge and bang on about sportsmanship with Cristiano Ronaldo? McGregor has no shortage of celebrity admirers: LeBron James, Mike Tyson,  Dwayne The Rock’ Johnson and Arnold Schwarzenegger are all said to be fans. McGregor was also spotted stroking the latter’s dog. (This is not a euphemism).

You can’t have failed to notice McGregor’s, um, ‘healthy’ self-regard. Apparently McGregor’s sense of self-belief is down to his love of Rhona Byrne’s bestselling self-help tome The Secret – a book in which the law of attraction is uncovered (believe it enough, and think positively enough, and you can make anything happen). Say “I’m the best in the world” enough times, in other words, and it’s bound to come true. Which explains a lot.

They’re probably the first things that most people notice about McGregor, but what do they mean? The very first one he got (Arabic script on his heel) in Ayia Napa for €20, ‘could mean anything’, apparently. Turns out this wasn’t his only impulse buy: McGregor says he added the tiger on a whim while on holiday in Venice: “I said ‘f*** it, I’m gonna get a tiger...’ I think it’s a courageous animal.”

Most eye-catching of all, though, is the silverback gorilla wearing a crown and holding a heart in its mouth. But don’t go looking for meaningful subtext: “I just like the way it looks,” says McGregor.

The residents of Crumlin have apparently been more than amused at the number of international journalists descending on the neighbourhood to reveal McGregor’s hardscrabble past (with varying degrees of success). Fewer are showing up to the leafy Laraghcon Estate in Lucan, where the McGregor family moved to in 2005. By all accounts, McGregor was devastated to be leaving his friends behind, but in more recent years had been happy to stay with his folks on his trips back to Dublin.

When you earn the guts of $15 million for 13 seconds’ work (as McGregor did after KO’ing Jose Aldo), dropping €2 million on a house probably feels like chump change. The mansion, called Ladycastle, is located on the grounds of the K Club in Kildare. Insert your own ‘ladygarden’ joke here.