Family Fortunes: I remember my father saying that I particularly would find it hard 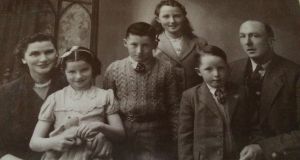 The Guilfoyle family, including Michael, prior to being transferred to Cork. “Our parents had already lived in Limerick, Waterford and Dublin and by the late 1950s had been longer in Wexford than anywhere else.”

For me even now, many decades later, the word “transfer” triggers memories of how it hung over us, like a Sword of Damocles, growing up in Wexford in the 1950s. Our dad was an inspector of taxes and, so that he wouldn’t get too friendly with the locals, the Revenue Commissioners’ HQ made sure he didn’t stay too long in any one place.

Our parents had already lived in Limerick, Waterford and Dublin and by the late 1950s had been longer in Wexford than anywhere else. As kids we loved Wexford. We lived in a row of townhouses, built by Pierce’s Foundry for some of its employees.

I even remember fishing for trout out my bedroom window!

It was called Casa Rio because the Horse river ran literally under all our front windows. I even remember fishing for trout out my bedroom window! Out the “back” were individual yards and a concrete lane and beyond that were our and the neighbours’ gardens. A perfect place to play and socialise and defend against neighbouring gangs. A great place to grow up

I remember our dad talking to our mam, when we’d be listening on the stairs, about how we as kids would or wouldn’t deal with being “transferred”. I remember my father saying that I particularly would find it hard. But still we went to school and we played and we explored, despite always feeling that all this easy, happy childhood would come to an end some day – a transfer would be ordered and the sword would fall on this familiar and safe existence.

And there were false alarms. One day my big sister raced out to the back and announced that we were being transferred to Letterkenny. She had heard our dad saying it. I remember us hoping Letterkenny was close to Wexford so that we could still play with our friends.

But then it happened. It was real. We were being transferred to Cork. And the neighbours gathered round, composed poems about us, made plans to visit us in Cork and some of my friends said they’d come and we’d cycle to Kerry. Then on a sunny winter’s day in late 1960, a huge yellow removal van with “Nat Rosse” on its side parked outside our house and our home and our lives were bundled coldly into it, to be transferred unceremoniously up the road to a new life in Cork.