For every troll or road rager there are countless more ‘sounders’

Everyone you meet is fighting a battle you know nothing about. That’s reason enough to be kind, surely?

From happy marriages to honest pedestrians, Irish people share the 'soundest' thing anyone has ever done for them as part of the #SoundEffect campaign. Video: A Lust For Life/Pieta House 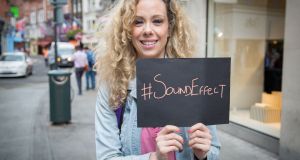 Is it just me, or have people become a bit more combative with each other than before? Perhaps it’s the affect of call-out culture on social media, where minor infractions and differences of opinion get amplified into full-blown spats. It could be that we’ve become apathetic towards others in a world brimful of hate, violence and tragedy. Or maybe it’s just that we’re a little more protective of, what little personal physical space we have in the world. Either way, it’s made for a tense and occasionally defensive atmosphere, both online and off.

Rarely a day goes by that some headline or another (Trump, war, terrorism, identity politics, take your pick) doesn’t confirm this niggling suspicion: other people are hell. And if you’re experiencing a sort of emotional/mental burnout because of it, you’re not alone.

“There’s a reason negativity sticks: as humans, we have evolved to be heavily attuned to threat for our own survival” explains clinical psychologist Dr. Malie Coyne. “Neuroscientists have proven that for every upsetting thing that happens, we need five positives to balance it.”

No better time, then, to be reminded that for every troll, snowflake or road rager out there, there are countless more ‘sounders’.

A Lust For Life, in association with Pieta House, have launched their #SoundEffect campaign. Ostensibly a bid to create a ‘wave of soundness’ across Ireland, the campaign is a neat reminder to focus on the positives in life: that most people are, at their essence, actually pretty alright. Their plan is to change the dial so that the internal chat about ourselves, and others, is kinder.

Scientific studies have proven that acts of unprovoked generosity aren’t just contagious, but can boost both your physical and mental wellbeing. A 2005 study from the Hebrew University in Israel found a link between kindness and a gene that releases dopamine, a feel-good neurotransmitter in the brain. Research by Alan Luks in his 1991 book, The Healing Power Of Doing Good, found that helpers reported a distinct physical sensation of warmth and energy when being kind, a phenomenon he calls the ‘helper’s high’.

Professor Sam Bowles from the Santa Fe Institute also coined the phrase ‘survival of the nicest’. “Groups with many altruists tend to survive,” he has said.

Organisations have gotten in on the action across the world: The Kindness Revolution (thekindnessrevolution.net) recognises great selfless deeds by companies and individuals, while the Secret Society for Creative Philanthropy encourages random of acts of kindness, from handing out umbrellas to giving stamped postcards to passersby.

Closer to home, it turns out we are no slouches in the altruism department either. While on holiday in Abu Dhabi, engineer Liam Murphy famously took his local taxi driver to a theme park after he admitted he’d never been on a rollercoaster. Last year, Irish fans at Euro 2016 went viral after singing ‘Twinkle Twinkle Little Star’ to a baby on a train in Bordeaux. And more recently, Offaly man Paraic Sullivan was hailed for stepping in to stop a stranger from getting their car clamped.

A Lust For Life is gearing up to publish The Little Book of Sound (read here), co-authored by Niall 'Bressie' Breslin, Susan Quirke and Dr. Malie Coyne, with illustrations by Natalie Keville. It will be launched at this year’s Electric Picnic (Sept 1-3) with a roll-call of speakers at the festival, among them actor Jack Reynor, broadcaster Miriam O’Callaghan and Health Minister Simon Harris.

“We want to highlight the little moments of soundness that are happening every day in our country,” says Paula McLoughlin, acting CEO of A Lust For Life. “#SoundEffect asks people in Ireland to show how being sound can help our minds and our lives - and can bring us together in a world that so often amplifies negativity and fear.”

Or, to use a careworn cliché, everyone you meet is fighting a battle you know nothing about. That’s reason enough to be kind, surely?

Here’s how to be a part of #SoundEffect:

2. Decide today that you’re going to do something sound just for soundness’ sake. Maybe let someone ahead of you in a queue, have the chats with a stranger in a lift

rather than stare at the ceiling, let someone have that car parking space - or grin and tell yourself your bum looks great when you next look in the mirror.

House. Remember this can be about being sound to yourself as well as to someone else - and it also can be as simple as telling someone they have their skirt tucked

into their knickers before they walk across a restaurant.

4. Treat your friends to a dose of soundness. Why not call that one friend you’ve been worrying about and just have the chats?

5. Press pause and choose soundness. Before you shout at that car who cut in front of you or finish off the milk so your flatmate can’t have his cereal, pause for a second and ask yourself - ‘Am I being sound right now?’ If the answer’s no, then take the opportunity to choose soundness instead.