Columban missionary who became the foremost translator of Korean poetry 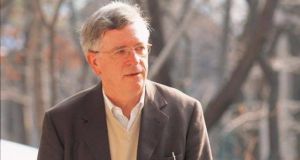 Kevin O’Rourke, who has died aged 80, was a Cavan-born missionary priest, poet and scholar, and a highly regarded translator of the poetry of his adopted home, Korea. By the time of his death last month in Seoul, he was the recipient of numerous literary awards, together with a Korean presidential citation and honorary citizenship of his adopted country.

He arrived there in 1964 as a 24-year-old newly ordained priest of the Missionary Society of St Columban and was quickly enthralled by the culture in which he became immersed and wished to share with others.

“I set out to put out the entire Korean poetry tradition in English,” he told this newspaper’s David McNeill in 2009. In the event, he translated some 2,000 Korean poems, from the 12th century to contemporary times, and came to be regarded as the world’s foremost translator of Korean poetry.

On arriving in Korea as a young man, his initial impression of the country was that it was a place full of insim, which he translated as meaning “human heart”.

But his attachment to Ireland – and to gaelic football in particular – remained undimmed by a lifetime spent in the Far East. Home for the last time in September 2019, nieces and nephews from around the world gathered for a family celebration to show their love, admiration and respect for him . . . and together watch the Dublin/Kerry football final replay.

“Where Kevin went, there was always fun and laughter,” a niece recalled after his death.

In 1957, he enrolled in Dalgan Park, Co Meath, the home and seminary of the Columbans in Ireland, and was ordained a priest six years later. The Columbans have a strong presence in east Asia and, the year after his ordination, O’Rourke went to South Korea to study the language, later becoming curate at So Yang Ro church in Chuncheon City, Gangwon Province.

The linguistic proficiency he achieved was such that friends said it was impossible to detect that he was not, in fact, a native born speaker and writer.

In 1967, he returned to Seoul and began a long association with academe there.

He was awarded an MA by Yonsei University in 1970 and a PhD in Korean literature (the first foreign national to achieve doctoral level in the subject) in 1982. His dissertation was on the influence of English poetry on Korean poetry of the 1920s.

From 1977 to 2005 he was a professor of literature at Kyung Hee University.

Throughout these years, O’Rourke’s stature grew as he translated more and more poetry and prose. Translations included The Dream Goes Home, the poems of Cho Byung-hwa, The Book of Korean Shijo, The Square, a novel by Choi In-hun, Our Twisted Hero, a novel by Yi Mun-yol, and A Thousand Years of Korean Verse (an anthology of classical and modern Korean poetry).

He also published The Book of Korean Poetry, poetry by Silla and Goryeo, Poems of a Wanderer, selected poems of Seo Jeong-ju, and Looking for the Cow, a comprehensive anthology of modern Korean poems.

For his translation Tilting the Jar, Spilling the Moon (poems from Goryeo, Joseon and contemporary Korea), he was awarded the 1989 Korean National Literature Prize. In 2017, he received the Daesan Literary Award for his translation of The Book of Korean Poetry: Choson Dynasty.

In 1995, O’Rourke received the East Asia Korea Literature Prize from Cornell University in New York. In 2001, he was awarded an honorary Doctor of Letters by NUI Maynooth and in 2005 was made professor emeritus of Kyung Hee.

In 2007, he was made an honorary Korean citizen for his services to the country’s literature. In 2010, the Irish embassy in Seoul named its 800 volume library in honour of O’Rourke.

He could be self-deprecating, saying on one occasion “translation is something I do for fun” when in truth, it was a lifetime’s devotion undertaken with huge commitment and seriousness.

He is remembered by friends for his genial company and full-throated laugh. His weakness, outside of literature and his faith, was golf, a sport he pursued with enthusiasm.

Though renowned for his academic work, O’Rourke remained a fully active and committed member of the Columbans, saying Mass whenever the opportunity offered itself and delivering thoughtful and perceptive homilies.

In his latter years, he lamented at times many of the changes that made Korean society faster and more intricate. “In the 1960s,” he told the Seoul Times, “folks were much easier going even when they had less. And nobody got angry if you parked your car in the wrong place.”

His love of Korea, its people and nature, is evident from In The Blood, a poem from his own volume, The Music of What Happens

If you wonder why Korea is in your blood,
look to the heart, to friends who endure,
to loyalty green as pine and bamboo,
to flowers that have bloomed in the snow.

O’Rourke died in Seoul on October 23rd, 2020 and was laid to rest there. He was predeceased by his parents, Francis and Teresa O’Rourke, and by his brothers Frank and Joe. He is survived by his brother Charlie and by his Columban family in Ireland and Korea.