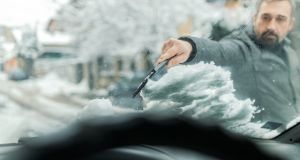 When someone gets out of bed when you’re running late for the early train, and de-ices the window of your car, that’s love.

As it is almost Valentine’s Day, I’m going to tell you what women want. Yes, yes, I know you don’t need it. I know you’re not some latter day Don Draper, cycling through lovers and martinis, climbing your way to the top of the career ladder on the shoulders of the Peggy Olsons in your life.

You’re not some slightly less hirsute Russell Brand, claiming that you’re too sensitive and awake and aware to change a nappy.

But Valentine’s Day is a tricky one. Everyone knows it’s a hackneyed, fraught, overwrought, commercialised, high-pressure day when restaurants are suddenly full of couples horrified at the prospect that they might have to look at each other and not their phones. And everyone knows that if they ignore it, they’d better come home in an explosive ordnance disposal suit.

So here’s what I suggest. Step away from the roses. Seriously, put them back in the bucket, turn on your heel and walk out of the shop. You’ll spend 50 quid on them, and we’ll be pleased for five minutes, and in three days, they’ll be as crisp as a packet of Tayto – two if there’s a radiator nearby. If you’ve been thinking of making a more cost-effective gesture of the fresh cut floral variety, I’d like you to repeat the following words after me: garage flowers are minus flowers.

You’re going to tell me that you do all these things anyway, but I’m afraid the data suggests that quite a few of you do not. The data suggests that some of you have yet to work out where the hoover lives. The data, I’m afraid, is damning: 90 per cent of Irish women, according to an EU report in 2017, do housework, compared with less than 50 per cent of men, a gap that hasn’t changed since 2005.

This is partly, I suspect, a generational thing. In most of the heterosexual relationships I know, both partners are heavily involved in the raising of the children. Many of the men I know are truly excellent cooks. A small but significant minority are brilliant at all of it. If that’s you, carry on – turn to the restaurant review, and start making plans for Valentine’s Day. Or maybe she looks after all that. Better still.

I’m talking particularly about the relationships in which women carry the “double burden”. They work during the day in a job they might not even love, but upon whose salary the family depends. And then they come home and cook dinner and organise the childcare schedules and the after-school activities and the school lunches and the laundry and remember what day tin whistle is on and who needs school shoes. And all the while they’re thinking about that email they forgot to send before they left the office and wondering when they can get back to their phone to send it.

They feel constantly guilty that they’re doing none of it as well as they feel they should, that they can’t be in two places at once and that sometimes, balls get dropped. If they complain about any of this, they’re nagging or whining or moaning or being a killjoy, all terms that serve nicely to keep women in their place.

Feeling exhausted, guilty and overwhelmed is not the preserve of women with salaried jobs, either: I know many women who are at home full-time who are overwhelmed. Or they feel guilty about the careers they’ve – maybe only temporarily – left behind. Or worried that they’re not contributing financially. Or guilty about the fact that if they have to hear one of the finer points of Fortnite described again, they might actually smash something.

Give her a break

So I suspect what many women in a heterosexual relationship would most like on Valentine’s Day is a break.

Love isn’t roses or remembering to book a table. It is not Daniel Day Lewis standing under a waterfall shouting “I will find you.” That’s not sexy, it’s stalkerish.

I suspect those are the words every woman wants to hear. Not “I love you” or “Here’s a token gesture of the fresh cut floral variety.” Just “go for it” and “I’ll handle that”.