First day in ‘actual Mount Anville’, but the last thing Honor needs is a chaperone 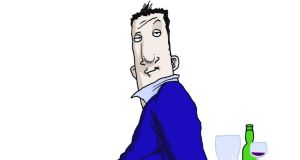 I’m looking out the window, thinking, yeah, no, the more time she spends at school, the less time we have to put up with her

It’s a big day. Sorcha has said it about 20 times since she shook me awake at, like, half-six this morning. It’s Honor’s first day in secondary school – or, as Sorcha calls it, “actual Mount Anville?”

Sorcha’s driving, Honor’s in the front passenger seat and I’m stretched out on the back seat with my leg in a full plaster cast. I’m thinking, ‘Wait till some of the mothers get a load of me – they’ll think the Rossmeister is back playing rugby again!’

Sorcha’s there, “I can’t believe you’re storting big school, Honor. It seems like only yesterday-.”

“Don’t you dare stort crying,” Honor goes. “I don’t want everyone knowing that my mother is a complete sap.”

She did. It’s a bit creepy.

Sorcha goes, “These are, like, moments, Honor. It’s okay for me to be emotional about my daughter getting another year older.”

I think to myself, ‘And one year closer to us marrying her off and passing the problem on to some other sucker.’

Except I don’t think it? The words actually come out, which sometimes happens to me. Honor releases the catch and pushes her seat backwards, crushing my leg in the foot well. The pain in my hip is savage. I’m like, “Aaarrrggghhh!!!”

“-and I put some iced fennel tea in your Bobble Bottle.”

“And don’t forget to sign up for lots of after-school activities. The piano – obviously. But you should also think about antiquing, Chinese debating and definitely something charitable even if it’s random.”

Honor’s like, “Yeah, whatever,” and she goes back to her phone.

I’m looking out the window, thinking, yeah, no, the more time she spends at school, the less time we have to put up with her – although I make sure to put my hand over my mouth when I think it this time.

Sorcha goes, “And I’ve asked Millicent Tierney’s daughter to chaperone you for the first few days.”

Oh, that gets Honor’s attention. She looks up and she’s like, “Excuse me?”

“You remember Hailey, don’t you? She’s in Sixth Year. I just thought it’d be lovely for you to have an older friend to help you settle in.”

I actually laugh. She is a knob. And so was her old dear. Millicent was in Sixth Year when Sorcha storted in Mount Anville. I think their old dears both played tennis in Monkstown and they decided that their kids should buddy up. It was Millicent who got Sorcha involved in the Trypanosomiasis Awareness Group.

“Hailey is hordly a knob,” Sorcha tries to go. “She got, like, maximum morks in her Junior Cert last year!”

I say nothing. It would serve no purpose.

She goes, “She’s a lovely girl with an amazing, amazing sense of civic responsibility – like mother, like daughter, I could say? – and I think you would really benefit from being friends with her. I don’t want you falling in with the wrong crowd.”

Actual Mount Anville can be a really intimidating place, Honor

It’s amazing. She’s been a port of our lives for, like, 12-and-a-half years now and it still hasn’t dawned on Sorcha that Honor is the wrong crowd.

Sorcha goes, “Actual Mount Anville can be a really intimidating place, Honor, especially when you think of all the amazing, amazing women who’ve passed through its corridors. I’m thinking in terms of Mary Robinson, Samantha Power… There’s, like, definitely more. But don’t forget to actually enjoy these first few weeks?”

“Er, how am I going to enjoy them?” Honor suddenly goes. “Everyone’s going to hate me.”

Sorcha looks over her shoulder at me – one HD brow cocked. She goes, “Why would anyone hate you, Honor?”

And Honor goes, “Because I’m horrible. And because I’m a bully.”

“Well,” Sorcha goes, not bothering to contradict her, “this is a chance for you to stort anew. A fresh page. Think of the next six years as being like those copybooks in your school bag. An opportunity to write your own future.”

Sorcha is a typical South Dublin mother – sees genius in everything her children do.

I’m half expecting Sorcha to burst into song then – except she doesn’t. In fact, we all fall silent as we take the turn onto Mount Anville Road and I stort remembering an incident two years ago when Honor smashed her violin into, like, two hundred pieces. Sorcha said to me, “Oh my God, do you know how many violins Niccolo Paganini broke as a child? I think she might be a prodigy, Ross!”

Sorcha is a typical South Dublin mother – sees genius in everything her children do.

I tipped upstairs to Honor’s room. There were bits of violin everywhere. I was like, “Why did you do that, Honor? I thought you loved that violin?”

And she went, “I did love it. But I don’t want to become too attached to anything. It’s a sign of weakness that my enemies might exploit.”

We’ve accidentally brought our daughter up to be able to look after herself. And God help the rest of the world.

Ten years old. God, I remember being so proud of her. What an attitude. I remember thinking, they should put her in chorge of Irish Water.

Sorcha pulls into the cor pork. She takes one look at the school building and bursts into tears. She goes, “Oh my God, now I’m remembering my first day here?”

Honor looks over her shoulder at me and goes, “I think your wife is going through the change. She needs to be on something.”

Then I spot – hilariously – Hailey standing a few away. Humungous glasses. Badge saying “Prefect”. Teeth that could chew through a wheel clamp. She smiles. She obviously has no idea what she’s in for.

I’m there, “You know what? I’m already feeling sorry for this poor girl.”

And Honor pushes her seat back one more time and I scream in agony. Then she gets out of the cor and goes off to face a brave new world.