Why is feminism so quiet about Muslim women who refuse to wear the hijab? 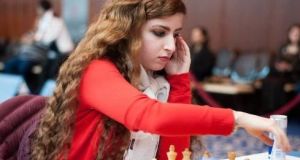 Why did more feminists not support Dorsa Derakhshani, the Iranian 18-year-old chess grandmaster who refused to don the hijab?

There have been many words written about Kevin Myers’ recent Sunday Times column; some in support of him, but many against. Myers may insist he’s not a misogynist but if it walks like a duck then we’ll call him out on it. Irish feminists – both male and female – have had a lot of calling out to do over recent decades and we haven’t shied away from that.

When I was born Irish women weren’t allowed to collect children’s allowance, sit on a jury, put their name to the deeds of their home or, in some cases, work after marriage. Rape within marriage wasn’t a crime because a wife was, essentially, sexually owned by her husband. Decades of hard, tough slog by feminists changed many of Ireland’s anti-women laws. Ditto our anti-homosexual ones. It wasn’t easy. It still isn’t. But if you believe that all people are created equal, you fight for it.

So why then, do liberal, feminist calls for equality stop at borders? I am at a loss to understand why equality is purely for one particular group of people and not for others. If I believe in the Universal Declaration of Human Rights, then surely that shouldn’t change no matter who I am or where I live – even if I was an Afghani woman living in Kabul or a Persian living in Iran, a woman in Riyadh or Roscommon?

Trump and his ilk would like to divide us into “Us” and “Them” and we are wise to call them out on their noxious racism and misogyny, their hateful bigotry. But this should not mean that we blindly defend practices – against women and minorities – that we would never tolerate in our own countries.

Anti-Muslim extremists often complain that there aren’t enough moderate Muslims challenging the radicals. But when liberal or ex-Muslims dare to step up to the plate they are derided as being “not Muslim enough” or as being Islamophobes themselves.

For some reason, when it comes to other cultures, we are more than ready to excuse mass discrimination on the basis that any country which has been abused or mistreated by western imperialism somehow has a “get out” clause when it comes to human rights for their own peoples. This then leads to mind-boggling alliances which make no rational sense.

For instance, in December 2015, the feminist and LGBTQ societies in Goldsmith University in London allied with the college’s fundamentalist Islamic society, against the ex-Muslim human rights campaigner, Maryam Namazie. Namazie is a trenchant opponent of the sort of discrimination that is now unacceptable in Christianity but somehow fine in Islam. Similarly, Maajid Nawaz, who works tirelessly defending Muslim communities in Europe, Pakistan and elsewhere from the “diktats of Islamist theocrats”, found himself on a liberal list as an “Anti-Muslim” extremist.

Ayaan Hirsi Ali, who was raised a devout Muslim, has often expressed her frustration at the manner in which Western feminists refuse to support liberal Muslim women, most recently giving the example of Dorsa Derakhshani, the Iranian 18- year-old chess grandmaster who refused to don the hijab at a tournament in Gibraltar last January.

She asks why do we loudly defend a woman’s right to wear the hijab but when it comes to supporting Muslim girls who refuse to wear it, feminism is strangely quiet? Women who wish to wear a veil should be able to, without criticism or social pressure to do so. But elevating the wearing of the hijab to a symbol of feminism struggle is twisted in the extreme.

Yet this is what happened earlier this year when women all over the US marched against the Trump ideology – at their head in New York was religious fundamentalist, “home-girl in a hijab”, Linda Sarsour, a pro-Sharia advocate and an apologist for the atrocious Saudi regime.

What sort of benevolent bigotry is this? Meanwhile, liberal Muslims suffer, not just alienation and punishment from within their own culture, but a very loud silence from those of us who are terrified that by speaking out we may be dubbed Islamophobic or on the same side as the likes of Trump, Farage, et al.

This isn’t good enough. Women’s rights – human rights – are for all; not just a select few. Either we believe in them or we don’t. And if we do we must fight for them everywhere, not just at home.