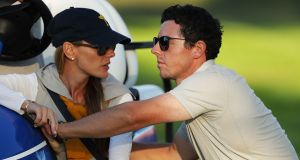 Erica Stoll and Rory McIlroy of Europe look on during afternoon fourball matches of the 2016 Ryder Cup. Photograph: Getty Images

Celebrity weddings in Ireland are par for the course now but news that Rory McIlroy is to marry Erica Stoll in Ashford Castle later this month is still a major deal and will see a global press pack descend on sleepy little Cong to steal shots of the big day.

Or at least try to. But the castle won’t be making it easy for them.

McIlroy and Stoll who is Manager of Championship Volunteer operations for the PGA of America met on the golfing circuit. He has said he and Stoll, a keen sailor from New York, were friends first before romance blossomed.

While the paparazzi are no doubt already scouting out where in the long grass on the castle’s fringes to best place their long lenses on April 22nd, the presence of Lough Corrib on one side and 350 acres of densely planted grounds on the other - not to mention all the high granite-grey walls which snake around the property - will see even the sharpest shooters struggle to get shots that land.

The hotel’s owners won’t make it easy for the uninvited to see what it going on either.

Staff protect the privacy of guests - and not just the famous ones - with a fierce zeal and when contacted by The Irish Times about the McIlroy wedding, a spokeswoman stoutly refused to confirm or deny it was taking place at all despite all the international kudos such confirmation would bring.

We’re still pretty sure it is happening mind you.

Privacy issues aside, it is easy to see why the couple chose Ashford Castle as their wedding venue what with it being widely regarded as one of the fanciest - and the most romantic -hotels in the world. In recent years its has been winning international awards faster the McIlroy has been winnng golf tournaments.

And what can the happy couple and their guests look forward to?

The rooms are massive and opulently furnished for a start and offer breathtaking views of Lough Corrib which stuns when it sparkles in the sunshine - although the sparkles are never guaranteed in the West what with all the rain and everything.

There is also one of the best buffet breakfasts in the world, buggy rides around the grounds, a falconry where birds of prey eat raw meat off your hands, golf - obviously - tennis, fishing, hunting, lake cruises and all the rest.

While the castle on the Galway-Mayo border reeks of comfort and privilege, particularly after the €47 million makeover it was given by its new owners two years ago, which added a spa, a pool and a cinema to its olde worlde charms, it is the staff that make the place so special.

They are just sound, in a real west of Ireland way and it doesn’t matter if guests pull up in Rolls Royces or in battered old Nissan Micras they will be treated just the same.

Mind you all the romance and the soundness and the falcons eating raw flesh of your hands comes at a cost, which the hotel details right down to the last cent on its website. A low season wedding starts at €63,324.25, mid-season prices start at €70,282.65 and the cost of a summer wedding starts at €92,732.65.

And remember they are the starting prices so it is safe to assume the Stoll-McIlroy hoolie will cost a bit more than that. Mind you, with Forbes putting the golfer’s earnings last year at just over €40m, he’s unlikely to be overly troubled when its time to check out.

While the addition of the signature of one of the world’s best golfers to its guest book is no doubt a coup for the hotel, it won’t be losing the run of itself as it is not unaccustomed to celebrity visitors having also hosted George V, John Lennon, John Wayne and Maureen O’Hara (when they were filming the Quiet Man nearby) Oscar Wilde, Ronal Reagan, Brad Pitt and Princess Grace. There are whole lot more besides but time is short.

The problem is mine. The wedding invitations issued at the weekend made me realise that I wasn’t ready for all that marriage entails.”

The golfer’s two other high profile relationships were with his childhood sweetheart Holly Sweeney and then tennis player Caroline Wozniacki. He and Wozniacki were engaged on New Year’s Eve in 2013 but McIlroy ended the relationship in 2014 saying in a public statement: “The problem is mine. The wedding invitations issued at the weekend made me realise that I wasn’t ready for all that marriage entails.”

He’s ready now to marry Stoll - a New Yorker and employee of the US PGA - despite one dark spot which has clouded the wedding preparations : the golfer’s failure to win the Masters in Georgia earlier this week. After that tournament ended, McIlroy expressed mild disappointment that he would not be wearing a shade of Augusta Green on his big day.

It’s probably for the best - who in their right mind would want to get married in a green blazer? Not even golfers have a fashion sense that bad.