International Men’s Day 2019: Who's standing up for men these days? 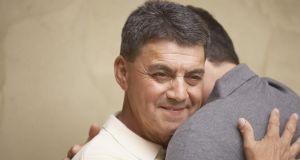 International Men’s Day sounds like the answer to a question very few people ask with a straight face: Who’s standing up for men these days? (Stock answer: Parliaments and religions the world over.)

Yet there are plenty for whom patriarchal capitalism isn’t quite working. In Ireland, men comprise 75 per cent of all rough sleepers, and 80 per cent of all suicides. The Irish Men’s Development Network (MDN) is a HSE-funded charity helping marginalised men to improve their relationships with both women and each other, and also looking after their own health.

They are marking International Men’s Day (today, November 19th) by combining it with the White Ribbon campaign against gender-based violence. Last night the Ireland’s men’s team who drew with Denmark last night wore white ribbons, while men around the country are being asked to take the White Ribbon pledge: never to commit, excuse or remain silent about men’s violence against women.

It’s a noble aim that could have real consequences in homes across the country. The Women’s Aid 2018 impact report makes for sobering reading. There were 16,994 disclosures of domestic abuse against women in Ireland last year. Around half of this was physical. The vast majority was committed by men.

Yet it is striking that a men’s organisation is marking International Men’s Day by focusing on the very real shadow side of masculinity: male violence against women.

“Being a man and standing up against male violence on women is a very positive thing,” says Sean Cooke of the Men’s Development Network.

“I understand the concern that it might not be the most positive point to come from when we’re celebrating men on their day, but we also want men to support each other, to look out for each other, to listen to each other, and to be the best man they can be – the best father, the best brother, etc.

“We want men to reconnect with friends, spouses, family, and community. Lots of men are doing fantastic things, and we need to acknowledge them as men. That lad in the community quietly doing great work is a man.

“For me, Men’s Day is also about men taking the time to look at themselves – the best bits about themselves, their best aspirations – and about looking out for your friend. It’s about making that call you’ve been putting off, or acknowledging that good deed.”

An equality-focused organisation, the MDN works in schools and communities and run men’s groups including a men’s health programme, advice lines, a counselling service, and the mend domestic violence intervention programme.

Cooke dismisses the idea that men don’t talk. “It might be among bravado and slagging and horseplay, but men do talk to each other,” he says. “It’s about making environments in which they can discuss these things,” noting that traditionally men would gather only for a functional purpose.

As well as 10 days of events against gender-based violence, the MDN is also setting up a Man of the Month campaign, celebrating as male role models those “who do things that are not normally seen as ‘male’.”

Cooke agrees there are positive traditionally “masculine” traits too. “There are, as long as you’re not taking an adversarial approach to it. When we talk about courage, we don’t say it’s only men who have courage. We’ve seen plenty of women with courage.

“As a men’s organisation we’re stepping into a area you wouldn’t expect, but it’s critical that we as men take a stand on this.

“We see ourselves as a feminist organisation and that sometimes is challenging, even among our own network. There are a lot of women supporting women on this huge issue, but where were the men? Well, here we are.”