His Late Late Show was way past my bedtime, but I still feel its influence 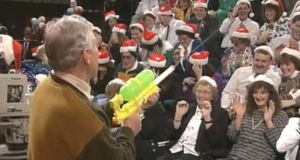 I was born a bit late to properly appreciate Gay Byrne. At least, that’s what I thought after the outpouring of fondness and respect that followed his death, on Monday.

I was still a child when he retired from The Late Late Show, in 1999, but the programme was a fixture in our house every weekend, as it was in everyone’s home, for decades. My mother, and grandmother if she happened to be over, would be stuck to it. There was a devotion to the Late Late, and an adoration of Byrne himself, that I didn’t understand.

The show’s more challenging content mostly went over my head – I was about 10 at the time – but I would use it as a device to try to stay up as late as possible. Such was Byrne’s power that my mother let me get away with it as long as she could watch uninterrupted. I never made it to the end, of course. At some point in the evening, full of sleep, I’d be carried to bed. When I grew too big to be carried my mother told me: “You might as well try to stay awake and watch, then.”

It took me a few years to see it as more than a ploy to stay up past bedtime. I would cynically observe the woolly 1990s perms of what looked to me like a geriatric audience – they were probably over 30 or some other very advanced age – oblivious to the role the Late Late played in forcing Ireland to look at itself as it really was.

Part of the show’s charm was the way it coaxed you into persevering through some strange or uneventful segments in anticipation of who might be on next: the potential for chaos was exciting even as a child. On a particularly good night Gay would have guests such as Billy Connolly or Spike Milligan, and then the wheels would really fall off. Or so it seemed then.

In retrospect it’s clear that Byrne’s great skill was in hovering above what would have been chaos with anyone else at the helm, sanguine and controlled. “Did you see the Late Late?” was the standard ice-breaker among the adults until Wednesday the following week, when “Who d’you think Gay will have on the Late Late this weekend?” would take over.

That was the television. Byrne’s radio show was a national conversation in real time. If you heard the opening jingle on a school day you knew you’d managed to somehow wangle a day off, and it was blissful. For me Gay’s voice on RTÉ Radio 1 was the soundtrack to convalescence. After I had dental surgery as a small child, and through a few winters of throat infections and other ailments, it was Gay who, just as on The Late Late Show, would talk me to sleep, the reassuring pitch of his famously mellifluous voice melting through the discomfort.

I asked my brother, who is three years older, for his memories of Gay Byrne, and he told me about the 1991 Late Late Toy Show, when Gay squirted the audience with a Super Soaker full of water, as utterly thrilling. Byrne’s paternal demeanour, his crisply ironed trousers and his delightfully awful jumpers all featured, as every year.

The Toy Show was when Byrne’s levity – a tool he used strategically in serious interviews – was fully allowed out to play. Dustin the Turkey would give him lip, and the man who could put the screws on politicians and bishops would converse at length about dolls and invite Zig and Zag around to his house.

It was only in adulthood that I realised Byrne’s historic role in Irish culture, and his tremendous influence. My doctoral supervisor, the philosopher David Berman, told me in my 20s that Byrne invited him to take part in a series of debates on the existence of God on The Late Late Show in the 1970s. Prof Berman, who had arrived at Trinity College Dublin from the United States in the 1960s and was as far from the standard Irish authority figure of the time as one could find, argued on the side of atheism. It was shocking for its time.

Byrne was complex, a facilitator of liberal discussion but not himself straightforwardly liberal. He valued the pursuit of balance and intellectual curiosity as a principle. In Ireland’s recent past of stringent ideological restriction, he taught viewers that there is no question we cannot ask and that the world won’t end if we say aloud that which has gone unsaid.

I am a little sad that my impressions of Gay Byrne when I was growing up were limited to what I could grasp at the time and that I was born a bit too late to understand the way attitudes pivoted after his rise to prominence. These things are always easier to see in retrospect. I can, however, appreciate our collective debt to him. The Ireland we now live in is one that Byrne’s push for open dialogue played a significant part in building. Who can know how different things would have been without him? He tore a gap through which stifled voices might roar, and he was a mean shot with a Super Soaker. We’re all the better for both.