‘I was going to vote for her, but then she said she wanted to be a swan’ 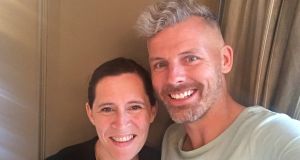 Des Do you not know yours?

Des Well, I always thought my spirit animal was a dolphin, but when I actually did one of those shamanic journeys, it was a bear. I was disappointed.

Sinéad I didn’t know it was a thing that you could find out.

Des I’m not saying it’s actually a thing, just people think it’s a thing. You don’t have any animals you identify with?

Sinéad I don’t feel like I have to personify them, I respect them for their own species.

Des This is not going to get you votes. ‘I was going to vote for her, but then she said she wanted to be a swan, and I’m just anti-swan.’

Sinéad A lot of people are anti-swan, they’re quite vicious.

What was the first album you bought with your own money?

Sinéad Frankie, the single, by Sister Sledge, and a bootleg of a Pixies concert I’d been to in the Point. I bought it on O’Connell Bridge.

Des The first album that was bought for me was U2’s October. The first one I bought was either NWA on tape, or Rob Base It Takes Two on 12in, because I thought I was going to be a DJ. I bought them at The Whiz on Main Street, Flushing.

What do you think it the best television show of all time?

Sinéad Probably The Wire. It’s such a beautiful composition.

Sinéad I was crying pretty much every day in the run-up to the referendum.

Sinéad I do a lot of baking. I can’t say no to a good lemon meringue, or anything with custard.

Des The Catcher in the Rye.

Sinéad I recently reread a book called Pornland, which is an incredible book about the impact of pornography on our society.

Des Z Cavaricci’s, these really high-waisted trousers that would pop out like parachute pants and tapered at the bottom.

Sinéad We were supposed to do a bungee jump in China. You couldn’t do it because you were too heavy.

Des It just so happens that they had a certain weight limit!

Sinéad After convincing me to bungee jump, you couldn’t do it. I did it. It was quite terrifying.

Des You were nauseous for about three hours. You couldn’t walk. After a while I was like “will you just f***ing walk and puke!” Me, close to actual death, I mean I had cancer. A lot of people bring that up, but it wasn’t that serious. But close to death makes me think of when I was next to my father when he died, I was literally there at that moment. It was pretty profound. It made me realise when the light goes out, it really does go out.

What is your favourite shop?

Sinéad The Mellow Fig, a cafe in Blackrock [Dublin]. I hate shopping, generally.

What subject do you wish you studied more in school?

Sinéad Art. I thought I was s*** at art, but like anything it’s just about hard work and practice. My daughter is really good at art. It teaches you so much about focus.

Des I was never good at maths. I wish I had gotten somebody who got me to appreciate maths.

Sinéad I play the piano and I love it. I have a tiny house with a big piano. I play mostly for myself, for relaxation. I’ve just started Bill Evans’s Peace Piece, which is one of my favourite tunes.

What was the last film that you watched?

Sinéad I went to see Citizen Lane. It’s fantastic, this film about Hugh Lane. Did you know he died on the Lusitania? I’m glad I didn’t go and see Deadpool 2 instead. I sound so much more intelligent.

What is your favourite piece of technology that isn’t a laptop or phone?

Des I like the laser thing in golf that tells you the distance to the hole.

Sinéad Scarlet for you!

Des At least I have a spirit animal.

Sinéad Mine is headphones or my good speaker at home.

Sinéad Gibney is the Social Democrats’ new candidate in the Dún Laoghaire constituency. Her cousin Des Bishop is a comedian and documentary-maker

‘My days of eating meat at every meal are over’
10