‘In Ireland, I was scared to say hi to people on the street’

New to the Parish: Imani Tutu arrived from Tanzania in 2014 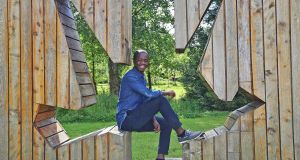 Imani Tutu at the Free Bird sculpture in Cavan. Imani came to Ireland with his family in 2014 from Tanzania as UNHCR-sponsored refugees. Photograph: Lorraine Teevan

Imani Tutu spent the first two decades of his life in a refugee camp in western Tanzania. A few years before he was born Tutu’s parents were forced to flee their home in the Democratic Republic of Congo after violence broke out in the early 1990s. They crossed the eastern border into Tanzania and sought safety in a refugee camp outside the city of Kigoma. At first they lived in a tent and then began to build a small home using whatever supplies they could get their hands on.

“Living there was very tough,” recalls Tutu who is now 24 years old. “We couldn’t even leave. If you were found in a nearby town you would be arrested because all the refugees had to stay in the camp. Honestly it felt like a prison. I couldn’t travel anywhere, I was always stuck inside.”

Tutu would go to school in the morning with the other Congolese children living in the camp and in the afternoon he helped his father on the family’s tiny farm. “I didn’t have the opportunity to play with the other kids after school. I had to work with my dad. We were planting maize, sweet potatoes and other types of vegetables. It was so we could have food because the stuff the camp gave out wasn’t great.”

With no radio or TVs in the camp, Imani had very little awareness of the world that existed outside the tented town where he lived. “I didn’t know it was different, I only realised that when I came here. Back then I was okay, I thought this is how people live their lives.”

As UNHCR registered refugees, Tutu’s parents always knew there was a small chance they would be selected for resettlement in Europe. However, after two decades of waiting, the possibility of ever leaving the camp seemed highly unlikely. “There was always that thought of maybe. We kept thinking one day, one day. We kept hoping.”

About six years ago, the family was invited to interview for resettlement and after two years of application forms, health check-ups and other tests, they were finally informed they were moving to a place called Ireland. “You can’t even imagine that feeling, it was the happiest day of my life. We knew nothing about Ireland, just that it was in Europe. So we started trying to figure out where it was and what it was like.”

The family was transferred to the city of Dar es Salaam on the eastern coast of Tanzania where they spent more than two months waiting for the all-clear to travel. In February 2014 the family boarded a flight to Amsterdam en route to their new Irish home. They stepped off the plane into a freezing cold country in the depths of winter. “I had arrived in my T-shirt and it was so windy. I had to go through my bag and put on all my clothes. I had four T-shirts on but none of them had long sleeves.”

As UNHCR sponsored resettlement refugees the Tutus were granted asylum upon arrival and did not need to apply through the Irish justice system. They spent two weeks in the Balseskin direct provision centre before moving into a home in Cavan town. “It was like starting a new life. Everything was different; the food, the weather, even the lifestyle. We were used to living in a rural area in Tanzania and now we were in a town. It was just that sense of freedom, that we had the right to travel. We didn’t have that before.”

The family, who spoke French and Swahili, immediately began to focus on learning English. Tutu, his parents and older siblings enrolled in classes at the Cavan Adult Learning Centre while the younger members of the family began attending a local school. “The main barrier for all of us was the language. None of us spoke English. Without the language you cannot make friends so you have to stay with your brothers and sisters and you can’t go out. I was even scared to say ‘hi’ to people on the street. What if they replied, what would I say next?”

After two years of attending language classes, Tutu felt ready as an English speaker to push himself further and moved to the Cavan Institute where he began a class in pre-law. He then applied for a degree in law and was accepted to University College Cork. In September 2017, he arrived in Cork ready to embark on the next step of his life in Ireland, now as a student in an Irish university.

“It’s been a very challenging year to be honest,” says the student who now speaks English with a comfortable fluency. “You have to read a lot of books and articles and that’s especially difficult for someone who does not speak English as his first language. But I knew what I wanted and that I had to focus.”

As the year progressed, and he became more comfortable in his surroundings, Tutu began making friends with students in his class. “It was hard to get to know people at the start because everyone was very quiet. But I have lots of friends now, both Irish and international. And then there’s the student life, you have to go out and have fun too. You need a break from studies.”

Ten months on, and having passed all his first-year exams, Tutu feels far more confident about the upcoming academic year. He says his parents are very proud of their eldest son and his academic achievements since moving to Ireland four years ago. “They are very pleased, actually they really can’t believe it.”

He hopes to specialise in human rights law and become a barrister when he graduates from UCC and dreams of working for the European Union or the United Nations. “I believe the reason I’m here today is because of them. It was UNHCR that brought us here but they’re founded by the UN. Without them we wouldn’t be there. I’d like to work with other people who are in the same situation as my family. Honestly, I just want to help people.”