Humans of Ireland: the stories behind the new Irish 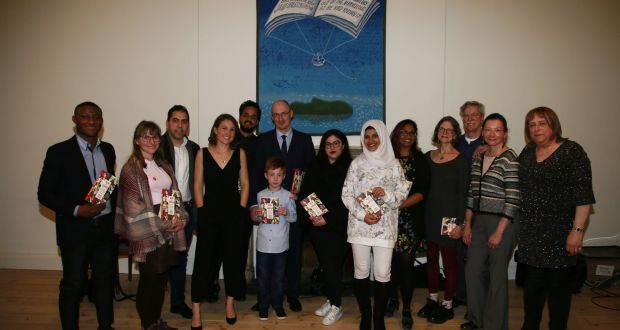 Sorcha Pollak with the faces behind the stories in her book, ‘New to the Parish – Stories of Love, War and Adventure’. Photograph Nick Bradshaw

Book Title:
New to the Parish

Any conversation in Ireland about immigration seems to quickly turn to the experiences of Irish emigrants and of the communities these left behind. Emigration is recorded in folk culture and ballads as a great trauma. It has been addressed by playwrights, painters and historians. A considerable body of literature has sought to grapple with these legacies. By comparison, the lives and travails of recent and past immigrants have yet to become seen as a mainstream part of the Irish story.

The subtitle of Sorcha Pollak’s deft and fascinating account of immigrant lives promises and delivers stories of love, war and adventure. It opens with a reflection on the author’s own family history. In 1948, her grandfather Stephen Pollak, a Czech political refugee, arrived in Antrim, where his wife hailed from.

This beautifully structured book follows the experiences of 14 people or families who arrived in Ireland since 2004. Each account is accompanied by a Reeling in the Years style snapshot of the events that shaped migration around the world, and Irish responses to these, on the year of their arrival. It expands to great effect on some stories that have featured in far briefer form in Pollak’s much-admired Irish Times column.

We meet Mohammed Rafique, a Rohingya Muslim, who fled his home in Myanmar in 1992 when he was 10 and lived in refugee camps for 17 years before coming to Ireland. His wife, Rafika, had lived in the same camp before relocating to Carlow in 2009. Their eldest daughter “was born on the floor of a makeshift hut in a refugee camp in Bangladesh”. Four and a half years later her sister was born in “a clean hospital bed in St Luke’s Hospital in Kilkenny”.

Migrants from the European Union or with ancestry that entitles them to Irish citizenship face none of the cruel restrictions that separate some migrants from their loved ones for years. Azeez Yuseff joined his parents in 2007 when he was 11. His father had left Nigeria when he was a baby and his mother followed when he was five. His parents spent a few years living in a direct provision centre, their lives on hold and not permitted to work, before their papers came through. They got jobs, reunited their family and sacrificed much to provide for their children.

Soccer helped Azeez, who could not speak a word in English on arrival and went off the rails as a teenager, to adjust to life in Tallaght. Ten years on and he is in the final year of a computer science degree and is head soccer coach with Sport Against Racism in Ireland (SARI). Racism was part of his day-to-day life but now he feels targeted only when he walks to the Mosque on a Friday dressed in a traditional jalabiya garment.

New to the Parish gives us the stories of Tibor, a nurse from Hungary, and his family; Bassam who arrived from Iraq as a child and has become an artist; Madga who arrived from Poland in 2005 as a young woman and weathered the economic crisis; George from Syria whose parents followed him to Ireland after their family restaurant in Alleppo was destroyed; Maisa who also fled Syria with her family before crossing the Mediterranean in a leaking boat; Zeenie from Lagos who joined the Discovery Gospel Choir and sang with the Waterboys as a backing singer; Carlinhos, a musician from Brazil; Chandrika who grew up in India and has studied in Turkey, England and the United States; Mabel, a singer from Cameroon; Flavia, a former journalist from Venezeula; Ellen from New York who feels a sort of “survivor’s guilt” for leaving Trump’s America with her partner James; and Eve, a trans woman motivated to leave England because of Brexit, whose wife Maybelle now works as a paediatrician in Wexford hospital.

Integration, as host societies might understand this, tends to happen in a range of ways unless immigrants are deliberately excluded by residency and citizenship rules or encounter debilitating levels of racism or discrimination. Integration, as explored in this book, involves overcoming loneliness, making friends and being reunited with loved ones. Part of what makes New to the Parish so engaging are the impressions of those who have travelled to Ireland of its people and places. Wherever they hail from, their lives and stories have also become Irish ones.

Bryan Fanning is professor of migration and social policy at UCD and the author of Migration and the Making of Ireland.