Boxer Kubrat Pulev has played down criticism after he kissed reporter Jenny SuShe during an interview, saying the two are friends. SuShe called the incident "embarrassing and strange", while Vegas Sports Daily said the kiss was "unsolicited." 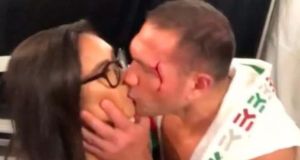 Bulgarian heavyweight boxer Kubrat Pulev had distinguished himself by knocking out Bogdan Dinu in Las Vegas on Saturday night, his 27th victory in his 28th professional fight. What was to follow was less glorious.

He was interviewed by Vegas Sports Daily reporter Jennifer Ravalo after the bout. At the end of the interview Ravalo asked Pulev if he deserves a shot at Britain’s former heavyweight world champion Tyson Fury. The 37-year-old responded with a firm “Yes”, before forcibly kissing Ravalo on the lips and walking off camera. Ravalo was later asked about the incident on Twitter and said it was “embarrassing” and “strange”. Vegas Sports Daily said the kiss was “unsolicited.”

Saturday’s events had echoes of an interview the 2017 French Open. In that incident, French tennis player Maxime Hamou was banished from the tournament after he attempted to forcibly kiss a female reporter during a live TV interview.

Hamou was interviewed by Eurosport journalist Maly Thomas for the programme Avantage Leconte after his first-round loss to Pablo Cuevas. The 21-year-old wrapped his arm around Thomas’s shoulder and kissed her on the head and neck as she rebuffed him, prompting laughter and clapping from the commentators in the studio. Thomas described the episode as “frankly unpleasant” in an interview with Huffington Post France, adding: “If I hadn’t been live on air, I would have punched him.”

Hamou later apologised for the incident. “I just lived a wonderful week here in Roland Garros living my most beautiful emotions as a tennis player, and I let my overflow of enthusiasm express myself awkwardly towards Maly, who I know and sincerely respect,” he said. – Guardian