‘Are you supposed to like your partner all the time?’

Laura Kennedy: How many minutes a week you can spend irritated by your partner before yours can be classed as a bad relationship? 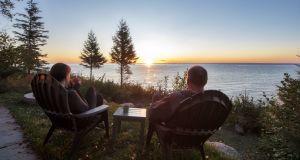 It’s not realistic to like your partner all the time. Photograph: iStock

Of course, as is the case for so many children, my parents’ relationship was a terrible blueprint from which to learn the contours of romantic interaction, and I learned some things that, in adulthood, I had to unlearn. One of those was that love inherently involves sacrificing your own happiness for someone else.

Don’t get me wrong – sometimes, this is indeed the case. I regularly sacrifice my happiness to watch tank documentaries with Jules, and he regularly sacrifices his happiness to look at funny photos of cats I find on the internet. We aren’t entitled to have our own way or feel brilliant all the time. This is markedly different, though, to perpetually putting the other person first, or allowing them to subsume you, or dictate how your life will be lived. It is different from feeling that constant unhappiness and insecurity are standard in relationships. It took me some time to learn that this is not the case.

I did not learn a huge amount of pragmatic value from observing my parents’ relationship, except perhaps how to keep a sense of humour about even the grimmest aspects of life, and that is indeed useful. After my parents separated, my mother would every once in a while laughingly talk about the stupider aspects of her relationship with my father.

One of those was his habit, when they were having a very serious or emotional exchange, of earnestly saying, “Well . . . I look at it like this –”, and then screwing his face up into a ridiculous expression which somehow tugged the carpet from under all that tension, and at which point they would both fold into laughter. In this way, the difficult conversations often never reached any resolution. My father was funny, but he was also emotionally about 12 years of age, which has its downsides.

For some time now, I have been chewing on the realisation that I don’t understand romantic relationships or how they work, and that rather than just being an oasis in an arid life landscape of deadlines, watching your salt intake and pretending you haven’t forgotten someone’s name at a work meeting, relationships are often a source of anxiety.

Who, for example, can tell us how many minutes a week you can spend irritated by your partner before yours can be classed as a bad relationship? Are you supposed to like them all the time? I feel confident that Jules dislikes me when I forget I’ve done a wash and leave it in the machine overnight, only to be washed again the next day. I dislike him when he puts his cold feet on me when he gets into bed. We dislike each other when we interrupt one another mid-sentence.

This is counteracted by many ways in which we like and love one another, but I don’t understand the alchemy that makes relationships good. Living with a person you love is something like amateur ice skating; when you get a good speed up it’s exhilarating and you think you have the hang of it, but very quickly you’re tripping face first or scrabbling, eyes and teeth flashing like a spooked donkey’s, for a hand rail. So much of the time, you look completely ridiculous.

My mother did not trust my father, for good reason. Anyone who makes jokes in the middle of a shrieking argument (usually about something unacceptable they did) won’t be the type you trust with your deepest insecurities. So much of the foundational stuff of relationships is blind trust; just flinging yourself off cliff edges (like an idiot), and hoping the other person catches, or falls with you, or that they got your text telling them to get milk and put a net out.