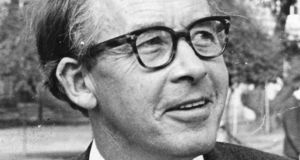 A significant amount of the credit for the transformation of the Irish economy away from a predominantly agricultural-based system to the modern industrial-cum-services economy has been credited to the late TK Whitaker. In reality the transformation also owed a great deal to Whitaker’s friend and academic ally Louden Ryan, and it may be more accurate to describe the successful transformation as due to the partnership between these two Northern Irish-born economists.

It was Ryan, a PhD graduate from Trinity College Dublin, a former lecturer at the London School of Economics and the author of a new economics textbook, Price Theory (1958), who introduced the rigour of economic theory and policy into the Department of Finance in the late 1950s when acting as its technical director of the Economic Development Board (1959-61) and later as its economic consultant (1961-69).

It was this rigour that helped Whitaker produce Economic Development and the ensuing Programmes for Economic Expansion that set the Irish economy on a new and more productive course. While leaving a deeply impressive imprint on economic planning in Ireland, Ryan had a multifaceted career moving seamlessly between academia and the public sector and still later into the commercial banking sector when he became governor of the Bank of Ireland.

William James Louden Ryan, always known as Louden, was born in Portadown in 1923. He attended Portadown College, where he met his future wife, Maudie, who was also a student there. He had a brilliant undergraduate career in Trinity, obtaining a scholarship in 1944. After graduation he was appointed an assistant lecturer in economics from 1946 to 1949.

Having obtained his doctorate from Trinity, he moved to London School of Economics, where he was appointed a lecturer in economics from 1949 to 1953. He returned to Trinity as a lecturer in the department of economics, then run by Prof George Alexander Duncan. Duncan and Ryan had different ideological approaches to economics, with the former espousing a strong libertarian line against Ryan’s eclectic Keynesian approach, which suggested that more government intervention was needed in the economy. Ryan soon established himself as an outstanding lecturer. Some of his lectures were soon published as Price Theory, a book that was used as a core textbook by many British universities in the late 1950s and 1960s. As Duncan held the chair of political economy, Ryan was appointed professor of industrial economics from 1961-67 and later professor of political economy from 1967 to 1985.

“Structure” is one of the most apposite words that can be used to summarise Ryan’s career. He created structures or improved structures in every institution where he worked. He structured the detailed provision and analysis of economic data for the programmes of economic expansion. Once his detailed analysis of the Irish economy had been made it provided a template for policy makers to select the appropriate policies necessary to move the economy forward. He structured a wide range of deeply influential councils and commissions.

But during this highly productive period, Ryan was not just contributing to public institutions, but also imposing his new structures on academia in Trinity. Along with his great friend Prof Basil Chubb he created the highly successful faculty of Business, Economic and Social Studies (BESS), which produced a wide range of options for students wishing to study in this area. He was less than happy recently to see the dismantling of the BESS faculty in a recent university reorganisation.

When TK Whitaker left the Department of Finance and was appointed the governor of the Central Bank of Ireland, he quickly ensured that his economic partner would be appointed to the board of the Central Bank in 1966. Once again Ryan was asked to provide a new future economic structure, this time related to money and banking. He chaired and wrote, along with economist Tom Hoare, the Money Market Committee Report, which showed how the indigenous capital market could be deepened and a money market established so as to enable Irish financial policy to develop domestically and free itself from overdependence on London.

His knowledge of banking then led to a third move in his working life away from academia and the public sector to that of commercial banking. On his retirement as a director of the Central Bank in 1978 he had, in that same year, been appointed a director of the Bank of Ireland. Seven years later he was appointed governor of the Bank of Ireland. This appointment caused some hasty rearrangements at the bank’s headquarters on Baggot Street, as they had to find a parking spot for the new governor’s fold-up bicycle. Always a modest man, he shunned the trappings of power such as chauffeur-driven cars for the governor. At the time of his governorship, which lasted until 1991, Ryan was criticised by some of the banking cognoscenti for his conservatism and lack of insight into some of the new innovative approaches to credit expansion. Unfortunately it was this lack of conservatism, along the new embrace of excessive financial innovation, that would serve to destroy the Irish banking system less than two decades later.

Ryan, with his structured analytical approach to economic, financial and academic issues, spearheaded the transformation of Irish society from the late 1950s into the 1990s. His excellence in teaching and administration has left a strong legacy of students who have greatly assisted this transformation and also contributed to developments across the world economy. He had a very good sense of ironic humour and embellished his comments with one-liners from the Old Testament, to the consternation of younger colleagues unacquainted with this work, to copper-fasten his arguments

His devoted wife, Maudie, to whom he was married for 64 years, pre-deceased him. He is survived by his daughter, Jane, and his son, Jonathan.