‘Men? In the kitchen? Well shag me sideways Brigid’ 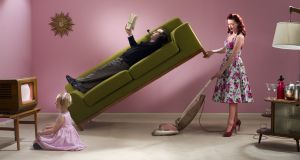 This housewife life was never for me. Photograph: iStock

I thoroughly demoralised myself recently reading more shiny happy shtick about the ageing process. The particular piece I was perusing had been compiled with the help of a “sexpert” and its basic premise was that maturing couples can continue to have a fulfilling sex life due to the hormonal rebalancing act that takes place as we grow older.

It seems that the Darby and Joans of the world are destined to end up in a nirvana of domestic equilibrium, with Darby busily embroidering his initials on to his apron while Joan clomps around the garden with a shotgun, firing rounds of claptrap into the ether.

Allow me to explain: as we get older, women’s oestrogen levels fall and our testosterone levels rise, while men experience the reverse process. The rapid reduction in oestrogen levels in older women can, apparently, free up the testosterone in our systems, testosterone that has always been there but which we’ve been keeping under wraps since girlhood.

According to the quasi-scientific piece I read, this beneficent biological blast of late-onset male hormone gives us women the balls we need to negotiate the latter part of our lives with clarity and confidence. Why, next thing we’ll be easing ourselves out of our tight-fitting gender stereotypes and scampering, helter-skelter and unrestrained, into the big bad world like . . . like men!

The article goes on to describe the happy hormonal convergence that takes place between the well-washed flannel sheets as men’s and women’s testosterone levels fluctuate in harmony. Allegedly, we women (who supposedly have heretofore been hiding our desires in the toes of our bed-socks) become bolder and more forthcoming about what gives us pleasure, while men (previously insensitive brutes) become more anxious to please.

And as if that wasn’t enough, the antics of that old testosterone trickster can even, according to our unnamed sexpert, lead to men “becoming happily engaged in cooking and homemaking”.  Men? In the kitchen? Well, shag me sideways, Brigid, there’s something worth queuing up to get a gawk at.

I’m sorry, did the compilers of this research just swerve off the road and crash into the 1950s while I was fiddling with the sat nav? What kind of a world is this sexpert talking about?

Idling on the bathroom floor (something I like doing because my laptop can’t see me there) and using my newfound assertiveness to shove the article down the U-bend, I thought about pretty much all the couples I know: the Darby and Joans, the Darby and Darbys, the Joan and Joans, the Jarby and Doans.  And with the exception maybe of one or two old friends, none of my cohort are living in relationships that could fit into the paradigm the piece seemed to be predicated on.

The couples I know, straight, gay and otherwise, who are navigating the hormonal waves and rages of their middle age and beyond, are not the archetypal characters the research describes. They are ordinary people in a constant dynamic negotiation about their roles and desires, as lovers, as workers, as parents. Their concerns, jointly and equally, are about all the usual stuff: money and health and housing, and the demands of ageing parents and unpredictable children and one-eyed dogs.

Basically, if I was a sexpert I’d be telling people that by the time you reach middle age, with or without a super-boost of testosterone, gender roles have already been diluted in the churn of life’s toploader. And man, am I grateful that life blurred the edges of the conditioning I and many of my peers received as children when we were skidding over the thin ice of the 1960s.

I remember when I was little girl of eight or nine and we lived on a long suburban road on a newly built estate on Dublin’s northside. At six o’clock in the evening, just as the Angelus bells were chiming on the neighbours’ transistor radios, the men would come home from work, the evening paper under their arms.

Swinging open their garden gates in anticipation of rashers and eggs for their tea, they’d occasionally be greeted on the doorstep by aproned wives who’d take their coats and hang their hats.

Sitting on our garden wall, waiting for no one, I remember thinking that if that was to be my life, an indoor wife with floury hands, I’d rather be a gerbil. In a cage. Revolving on a plastic carousel. Sh*tting pellets in the straw.

Anyway, it didn’t happen. Instead I became a daydreamer on bathroom floors, an expert procrastinator with a novel to finish and a cat to feed.