Sean Moncrieff: ‘If you can’t have a home, then what’s the point?’

Land and a sense of place are encoded into our DNA

October 3rd, 2018: Up to 10,000 people, of all ages and from across the country, gathered at a rally outside Leinster House in Dublin on Wednesday demanding an end to the housing crisis. 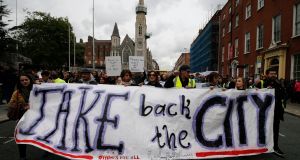 “We’re hearing some snippy commentary that the majority of the Take Back the City protestors are young and middle class.” Photograph: Nick Bradshaw

In late 1969, a group of students occupied 45 St Stephen’s Green, then a Georgian building in a poor state of repair. Such was the novelty of this at the time that RTÉ dispatched a reporter. But rather than a group of grizzled lefties, he encountered some rather plummy-sounding young women. One was going to school in Alexandra College. Another was Marian Finucane, then an architecture student. They all politely explained that they were attempting to protect the architectural heritage of the city.

But this was far more than some quirky item for the end of the news. The buildings on St Stephen’s Green and a few more around the corner on Hume Street were owned by the Green Property Company. Green wanted to knock them down and build office blocks. Dublin Corporation had refused permission, but the Minister for Local Government, Kevin Boland, had overruled it. The buildings would have been levelled if the students hadn’t moved in.

Their action generated a lot of approval. Politicians and various public figures voiced support. Charlie Haughey sent them a Christmas hamper. School parties visited. Sensing the public mood, Green Property staged a press conference where it outlined a plan to sell the buildings to An Taisce; and then admitted that it hadn’t been in contact with An Taisce.

The occupation lasted six months, until a Sunday morning in June when employees of a company called K Security entered one of the houses in Hume Street. They beat up the four people they found inside and removed them from the building. Then a demolition crew entered and destroyed the roof. The gardaí did nothing.

That afternoon about a thousand people attended a protest. Among others, Garrett Fitzgerald and Mary Bourke (later Mary Robinson) addressed the crowd. The minister for finance, George Colley, convinced Green Property to cease demolition and reapply for planning permission.

This is about  home: an idea that is emotional, political and physical, that is fundamental to us as individuals, as communities, as a country

And this time the company got it: on condition that the new buildings reproduce the facades of the old ones. Georgian was replaced with plastic-Georgian. Similar facades now litter Dublin.

How times don’t change. Once again we’re seeing people being kicked out by private security, and we’re seeing an a lack of action by gardaí. We’re hearing some snippy commentary (as there also was in 1970), that the majority of the Take Back the City protestors are young and middle class.

But perhaps what’s different this time is the reaction of government. Even the men in the mohair suits seemed to understand something that today’s posh boys in Fine Gael do not: that cities are economic battlefields. Money and tax breaks and the holiday home in Cannes can be kept from general view, but on the streets, capitalism is revealed at its most naked: where the rich physically supplant the poor, where people with history and heritage in an area are squeezed out of it; where the futures of families are bought and sold by banks and the modest three-bed semi becomes unattainable.

Perhaps if they had paid more attention in the history class of their fee-paying schools, they might have noticed that evictions, land and a sense of place are rather touchy subjects in this country. They are encoded into our DNA.

The political line is that it’s all a disgrace and a distraction; that all this protest won’t build any houses.

This is about home: an idea that is emotional, political and physical, that is fundamental to us as individuals, as communities, as a country. If you can’t have a home, then what’s the point? Take that away and you’ll have more and more people on the streets. To take those streets and cities back.