Honeymoon parties: the latest US imposition on Irish weddings

There’s been a tangible rise in this trend in Ireland. But what the hell are they? 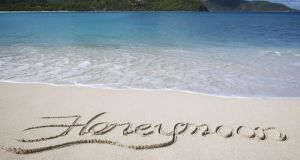 The objective of today’s honeymoon party, it would seem, is to ensure that a bride doesn’t have to befall a last-minute dash to Boots for suncream. Photograph: Getty Images

Ever get a wedding invite and the ominous thud of it on the doormat puts you in mind of a jury duty notice or an electricity bill? No wonder: according to a recent survey by One4All, Irish guests pay an average of €643 on outfits, transport, reception drinks, accommodation and gifts, just to attend a wedding. UK research by Provident goes one better, noting that guests have to shell out about £1,015 just to be a wedding guest (double for a wedding abroad). And everyone has at least one year where the entire social circle falls like dominoes and a dozen wedding invites come at an alarming clip.

That weddings can be a pricey endeavour for guests isn’t really news, but a recent addition to the entire fandango might be. Now, though, “honeymoon parties” are being added to the traditional engagement party, hen party weekend and post-wedding BBQ fandango. “What is a honeymoon party?” you may reasonably ask. It’s an evening event, often happening in a bride’s or bridesmaid’s home, where female guests enjoy the same merriment and libations as in a hen party, except they are invited to bring a gift that the bride can enjoy on her honeymoon.

Kate Hyde, director of henparty.ie, has noticed a tangible rise in the honeymoon party trend in Ireland. “So much so that we have bought a lot of stock for them: his’n’hers flip flops, beach towels, passport covers, bathrobes and so on.”

Naturally, it’s an import from the US, where honeymoon parties are now an established part of a wedding event (we have yet to import the American bridal shower and rehearsal dinner, so that’s something). Bridesmaids are tasked with organising the logistics, along with food, drink and games.

Honeymoon parties are not replacing the popular hen party; rather, they’re replacing the old kitchen party from decades ago (which, of course, was replaced by the hen party. It’s fine, we’re all confused). Tradition dictated that “older” married women would teach a young bride about what might happen on their wedding night. Yet the objective of today’s honeymoon party, it would seem, is to ensure that a bride doesn’t have to befall a last-minute dash to Boots for suncream.

“Years ago brides would receive gifts for their new kitchen the night before their wedding, but most couples already cohabitate by now,” says Hyde. “Often, brides will receive really thoughtful things like a travel bag, or a hair-care product pack. Sometimes, it’s unreal the imagination that people go to.

“Often mothers, grannies, under-18s and pregnant friends are not invited to the hen – who wants their granny seeing them take a pole-dancing class? – so basically they are invited to this so that everyone feels included and can enjoy the run-up to the wedding.”

Surely, I say, a honeymoon party is just another excuse to shake down guests for yet another gift?

“No one person is being shaken down as there won’t really be an overlap of people there,” says Hyde. “The bridesmaid might have to take a hit.

“I think when you’re in the zone and getting married, there’s a lot of excitement. Besides, a lot of the gifts for honeymoon parties can be under €10. To be fair to a lot of brides, they don’t go in for all the events, or they might keep some of them more low-key.”

Fifty years ago many Irish couples would marry in the morning, enjoy a wedding breakfast with family and friends, and most people would go back to work afterwards. Fast-forward to the present day, and marriage is nowhere near the massive life step it once was. It’s an institution with a built-in escape hatch (divorce rates in Ireland are remarkably low compared with the US and UK, working out at 0.6 per 1,000 marriages, according to Eurostat, but still). And yet, the idea of an excessive, lavish wedding with many different components is now entirely acceptable. It helps to feed into the cultural conceit that marriage is somehow an accomplishment, or a sign that you’re doing the whole adulting thing properly.

While marriage isn’t the institution it once was, weddings – whether you’re a customer care rep from Cork or a legal secretary in Carlow – are now treated with the gravitas and reverence of a medieval royal union. The entire event has become Kardashianised, and it’s rare to find brides who can withstand the siren-song of it all, especially if everyone else in their social circle has opted in. During the leaner, post-Celtic Tiger years, a profligate wedding was gauche and tasteless, but such concerns seem to have ebbed away.

Yet once we unlock another level of wedding-related excess – the post-wedding BBQ, the hen party weekend, the weeklong wedding celebration – it’s astonishing how quickly it becomes the new normal.

“There are multiple experiences for the bride now,” concedes Hyde. “We’re also starting to see a rise in ‘mother of the bride’ parties, where mums will hold a garden party for her own friends and a generic gift is brought for the mother. Oftentimes, brides will have a spa weekend with their bridesmaids and then a girlie dinner with a week to go before the big day. There’s often a ‘postmortem’ event after the honeymoon, where the bridal party can talk about the big day. It certainly wasn’t the way of it when I was getting married. Now most of my clients have a two-day wedding. I think some people do feel the [financial] pressure and it can be a lot of put on someone’s shoulders.”

Yet perhaps Irish brides, and their bridesmaids, have a breaking point. “We don’t have the bridal shower thing happening in Ireland, at least not yet,” says Hyde. “I do know a few people who tried to get them off the ground here and started a bridal shower business, but it didn’t quite happen. I think the honeymoon party is the closest thing we’ll get to that.”