Garda comes to aid of 84-year-old man, comedians' favoutite routines, Fleabag on stage and a simple soup to cook 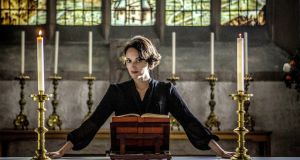 Phoebe Waller-Bridge in the TV series that grew out of her play Fleabag. Photograph: BBC

A feelgood tale of support

Conspiracy theories and hate aside, Twitter frequently shows us the goodness in our community. This thread tells a feelgood story: Lauren Casey @Lozzakc, tells us she received a call by accident from “a lovely 84-year-old man named Jack” who rang thinking it was the number for his local Garda station. He said he was too scared to go outside and he really wanted the newspaper. They ended up having a great chat on the phone. She’s in Wicklow, and offered to ring his local Garda station in Carlow to see if someone could drop a paper into him.

Seven hours later, Jack called her back to say a garda named Darren, had brought him the paper, gone to the shop to get yogurt for him, and given him his personal number to call if he needed anything else.

Jack’s story was picked up by Joe Duffy's Liveline, and he is now the owner of a brand new subscription to The Irish Times. A great tale of community support @GardaTraffic.

The cliche that laughter is the best medicine nonetheless has truth. Cheer your funnybone in a time of plague with a compilation of stand-up routines chosen by comedians as their all-time favourites, from Eddie Murphy on Rocky to Eddie Izzard on penknives.

Phil Wang selected US comic Andy Daly’s five-minute mock stand-up routine about nothing at all - which he describes as very funny, but also technically interesting to see stand-up stripped of content. Michelle Wolf’s Women are Their Own Worst Enemies routine is funny and wise, says Lou Sander, and lays into men and women equally. Read it here

Missing an ingredient? No problem

Regularly empty flour and egg shelves in the supermarkets these days suggest many of us are baking at home more often – a positive in the midst of Covid-19 (despite the weight gain). But, as popping quickly out to the shops for a missing ingredient is an activity now temporarily consigned to history, what happens when you don’t have an apparently vital ingredient for a recipe?

The Guardian has compiled 23 cake recipes that offer useful tips from bakers for when you’re missing something. There’s a lemon cake with cannellini beans, ground almonds and four eggs for when there’s no flour.

Alternatives to refined sugar include syrups (maple, agave, date), fruit (dried and fresh) and sweet root vegetables(carrots, sweet potato). And it quotes a vegan trick useful for baking during egg famines: You mix 1tbsp chia seeds or milled flaxseeds with 3 tbsp water and set aside for 15-20 minutes for a “vegan egg” in brownies or loaf cakes.

Phoebe Waller-Bridge’s play Fleabag, one of 2019’s hottest theatre shows with a sold-out run at London’s Wyndham’s Theatre, is be streamed online to raise money for those affected by Covid-19. An account of “some sort of woman living her sort of life”, written and performed by Waller-Bridge, and directed by Vicky Jones, the play won Waller-Bridge an Edinburgh Fringe first in 2013 and formed the basis for the first TV series.

Proceeds to charities including the National Emergencies Trust, NHS Charities Together, Acting for Others (providing support to theatre workers in times of need) and a special Fleabag Support Fund, which will distribute grants of £2,500 to freelancers working in the UK theatre industry.

Fleabag can be streamed on Soho theatre’s On Demand site and from April 10th on other sites including Amazon Prime Video.

There is more “striking”, and heartening, evidence that the BCG vaccine, given to counter tuberculosis, might also protect against Covid-19 and significantly reduce death rates in countries with high levels of vaccination.

A study of 178 countries, by Irish consultant urologist Paul Hegarty of the Mater Hospital, Dublin working with epidemiologists at the University of Texas in Houston, shows countries with vaccination programmes – including Ireland – have far fewer coronavirus cases by a factor 10, compared with those where BCG programmes are no longer deployed. This translates into a death rate that may be 20 times less, reports Irish Times’ Science Editor Kevin O’Sullivan.

The “correlation” study, expected to be published shortly by PLOS journal, is largely statistical and comes with caveats because of the possibility of confounding factors. The non-specific immune benefits of BCG have been known for decades. Introduced to Ireland in 1937, it has a strong safety record, and recent studies show revaccination is safe.

Proving that store-cupboard recipes can be zingers is this spiced lentil soup from Michelin-starred chef Ahmet Dede. Our Kitchen Cabinet recipe today is a staple in his homeplace, Turkey, and a dish he grew up eating.

Using lentils, spices, tomato puree and yogurt, it sounds the perfect recipe – a winning blend of straightforward, tasty, and using ingredients you likely have to hand.