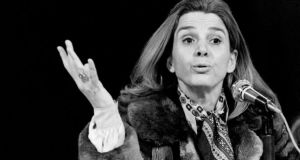 Gisèle Halimi in 1978: As a lawyer, she sought to redress injustices against women and to seek justice for torture victims. Photograph: Jean-Claude Delmas/Agence France-Presse

Gisèle Halimi, a French lawyer, activist and author who championed feminist causes and other human rights efforts for more than seven decades, playing a key role in the decriminalisation of abortion in France, died at her home in Paris on July 28th, one day after her 93rd birthday.

The death was confirmed by her son Emmanuel Faux.

As a lawyer, Halimi (pronounced ah-lee-mee) frequently sought to redress injustices against women and to seek justice for victims of torture in countries like Tunisia and Algeria, both of which were under French control when she began practising law in the postwar years.

“She assumed the world was divided between oppressing and oppressed people,” said Violaine Lucas, a national secretary of Choisir La Cause des Femmes, a women’s rights organisation that Halimi co-founded in 1971 with the author and philosopher Simone de Beauvoir. “These convictions were in her guts.”

Her cases were often high-profile and precedent-setting, and helped shift French laws and attitudes.

In 1960, during the Algerian war for independence, Halimi represented Djamila Boupacha, an Algerian nationalist who was charged with attempting to bomb a cafe near the University of Algiers and then raped and tortured while in French custody. Halimi encouraged her to pursue a case against her captors, an almost unheard-of course of action at the time, and the case became a cause célèbre in France after Beauvoir wrote about it in Le Monde at Halimi’s request.

Boupacha was eventually released and pardoned. (The case was the subject of a 2011 French TV movie, “Pour Djamila”.)

Halimi’s reflections on the case, with contributions from other writers, like Françoise Sagan, became her first book, with an introduction by de Beauvoir and a cover portrait of Boupacha by Pablo Picasso.

Halimi worked on another landmark case in 1972, this time focused on a teenage rape victim and her right to get an abortion, which was illegal at the time except in cases in which the life of the mother was in danger. The young woman, Marie-Claire Chevalier, was found innocent of committing a crime, and the trial helped shift the country’s abortion laws toward eventual decriminalisation.

Halimi had a reputation for being combative in her convictions, but her courtroom arguments were notably calm, surprising some judges and other lawyers. “They were expecting that she would be like a crazy woman,” said Emmanuel Pierrat, a lawyer and author who watched Halimi try several cases. “Not at all.”

He added, in a phone interview: “As soon as she started to talk, everybody was silent. She had a commanding presence.”

Halimi was born Zeiza Gisèle Élise Taïeb on July 27th, 1927, in Tunis, in the port neighbourhood of La Goulette. Her father, Edouard Taïeb, was a legal clerk; her mother, Fortunée (Metoudi) Taïeb, who was known as Fritna, was a homemaker. The household was extremely traditional and male-dominated.

When Gisèle was born, her father was so upset at the arrival of a daughter instead of a son that he kept her birth a secret for several weeks. Learning of this afterward, Halimi was stung by his reaction.

“She was always coming back to that,” said Annick Cojean, a senior reporter at Le Monde and co-author of a book of conversations with Halimi, Une Farouche Liberté, (A Fierce Freedom), which will be published in France this week. In a phone interview, Cojean recalled Halimi saying, “Did you know that my father didn’t even want to admit it?”

“It was such a malediction to have a female descendant,” Cojean said. “That really struck Gisèle.”

From an early age, Halimi rebelled against her family’s expectations, its preferential treatment of her brothers and a proposed arranged marriage. When she was 10 she went on a hunger strike to fight for more equal conditions within her family. She described the episode in the new book as “her first feminist victory”.

Still, she excelled in school and decided to become a lawyer as a teenager. She went to Paris to earn her law degree and study philosophy at the Sorbonne.

Joining the bar in Tunis at 21, she practised there for several years before returning to Paris, where she continued to practise until her death.

Halimi remained politically involved outside the courtroom. In 1967, she served on the Russell tribunal, a body of anti-war activists founded by the philosopher Bertrand Russell and presided over by the philosopher Jean-Paul Sartre; it determined that the United States had committed multiple war crimes in Vietnam. In the 1980s, she served in the French National Assembly and as the French ambassador to Unesco.

She also wrote or contributed to about two dozen books, mostly concerning causes she was most passionate about, like feminism.

In 1961, Halimi married Claude Faux, who was Sartre’s secretary; he died in 2017. An earlier marriage, to Paul Halimi, ended in divorce.

In addition to her son Emmanuel, a radio journalist, she is survived by two other sons, Jean-Yves Halimi, a lawyer, and Serge Halimi, the director of the monthly newspaper Le Monde Diplomatique; a brother and a sister; and two grandchildren.

Even in her 90s, Halimi’s passion for social justice did not fade.

“When we last met with her a few months ago,” said Maria Cornaz Bassoli, a lawyer and also a national secretary for Choisir La Cause des Femmes, “she was still talking about, ‘What will be our next fight?’ ” – New York Times service

We can hear our neighbours through the walls, what can we do?
5

Rock’n’wool: Irish knits come in from the cold
Real news has value SUBSCRIBE