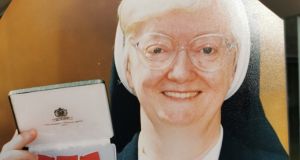 After stepping down in 1996, Sr Barbara focused on charity work. When it came to meeting captains of industry, a mention of the OBE helped open many a door.

A summons to Buckingham Palace to receive an award from the queen is a rare honour. An honour even more unusual when the recipient is an Irish Catholic nun. No wonder Sr Barbara Sexton, of the Sisters of the Cross and Passion, was amazed, if delighted, to see her name on the 1992 New Year’s Honours list.

Helena Sexton (Lena) was born on January 16th, 1935 and grew up on Dublin’s northside. Her parents, Denis and Anne Sexton hailed from west Limerick. Lena was the eldest daughter of seven children.

Lena attended Maryfield College on Glandore Road, a school newly established by the Sisters of the Cross and Passion. Lena loved everything about Maryfield, even the schoolwork. It was no surprise when she duly applied to enter the order. At her profession, she took the name Barbara. After some years teaching in convent schools in Kilcullen and Ballycastle , she was moved to Mount St Joseph School (MSJ) in Bolton, UK. In 1973 she was appointed head teacher. Little did she realise the challenges that lay ahead.

Under her leadership, the Mount evolved from a traditional direct grant grammar school for girls to become a co-educational, inner urban, split-site comprehensive school. To Sr Barbara fell the task of adapting the curriculum, re-skilling her staff and managing a merger. During the building of the new Mount St Joseph, the architect was heard to remark that Sr Barbara knew where every socket would go – better than he did!

In recognition of her achievement she was awarded the OBE.Her focus included more than academic success. “Catch them doing something right”, she’d say, “and then, celebrate it”. She included the “differently-abled” children in school activities and gave them prizes when they thrived. And those who went astray – she visited them in prison. Having grown up amid the rough and tumble of four brothers, she now haunted the MSJ football field, willing the newly-admitted boys to win – against all the odds.

The emphasis on celebration included the school staff. On March 19th, the convent hosted gatherings to celebrate the feast of St Joseph. The menu included Irish coffee and Sr Barbara’s favourite: cream cakes. If for some reason a staff member was grieving she was known to sit down with them and share a cream bun.

Whether for a wedding, a christening or a funeral, Lena loved to come home. Often she brought with her a doll she would have knitted for one her many nieces and nephews. Full of imagination and colour, Aunty Lena’s dolls are cherished some 40 years later.

After stepping down in 1996, Sr Barbara focused on charity work. Here she was inspired by the foundress of the Sisters of the Cross and Passion. A North of England woman, Elizabeth Prout dedicated herself to alleviating the widespread poverty in the industrial north west England. Accordingly, Sr Barbara co-founded Befriending Refugees and Asylum Seekers. This organisation later became an important part of Bolton’s Destitution Project. When it came to meeting captains of industry, a mention of the OBE helped open many a door.

On June 12th, in the convent retirement home at Lytham St Annes Sr Barbara had her evening cup of tea, possibly with a dash of cream. Either way, she lay back on the pillow and in the loving care of fellow sisters and staff members, Sr Barbara quietly surrendered her soul to her Lord God.

She is survived by four siblings: Patricia, Margaret, Conor and Denis.