Sean Moncrieff: We’re lucky. We had a room to self-isolate in

I brought her up wine and chips. At one time such a prospect might have seemed rather jolly 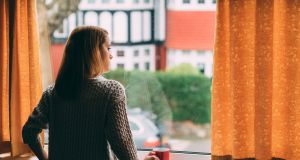 In the context of our house, ‘self-isolate’ meant take to the bedroom. Photograph: Getty Images

Here was our brush with Covid Hell. Brace yourself.

Herself has been working from home for six months now; or more correctly, mostly working from home. She has to go in two or three times a week for short periods. On one such visit, she spent about an hour in a radio studio with a colleague. They socially distanced.

But here’s the thing about studios: they are ventilated, but given that the primary concern in studio design is to cancel out any ambient noise, everything has to be quiet. Studios tend not to figure in the Ventilation System of the Year Awards. If you sit in a studio with an infected person, best not book a restaurant for next weekend.

In prison, isolation is a form of punishment. Chips don’t help if the one thing you really need is a hug

During this time, unbeknownst to them, the colleague’s partner had taken ill. His doctor ordered a Covid test. When they found out, it triggered the company protocol. The studio was immediately shut down to be deep cleaned; all the pop shields (the spongy bit around a microphone) were thrown away.

In the context of our house, “self-isolate” meant take to the bedroom. There’s an en suite and a telly. I brought her up wine and chips.

At one time – like last March – such a prospect might have seemed rather jolly. Now we know better.

But even though we, like everyone else, have ploughed through six turgid months of lockdown and a general sense of diminishment, this was surprisingly difficult. In prison, isolation is a form of punishment. Chips don’t help if the one thing you really need is a hug.

Most of the children were away, leaving just Daughter Number Four. She understood that Mammy was sick and couldn’t be disturbed. But the distracting power of Frozen 2 and chips only lasts so long. Eventually, she sat on the stairs and bawled because she wanted to give Mammy a cuddle. From upstairs, I could hear Herself crying too.

I’ll puncture the tension now and tell you that the test turned out to be negative. It took 48 hours to get a result. Two days marooned upstairs. Herself wants us to move to a different bedroom now.

You might conclude that this was just another case of Covid hysteria, of the massive disruption and loss of freedom caused by a barely-there virus. There’s a lot of that on Twitter these days.

Certainly, what happened to us was not much more than a bit of inconvenience. And we’re lucky: there was two of us to deal with it. We had a room to self-isolate in.

Of course, it’s not the same as six months ago. There are no more feel-good rounds of applause. Our collective patience is frayed to almost nothing

But it reminded me that the virus has been having an effect far beyond the numbers we hear about. Tens of thousands have been ill, some severely. Some are starting to report long-term symptoms. And of course, some have died.

But for every infected person there have also been family, friends, colleagues. An infection, even a potential infection, means that a partner and other family members have to try to get on with things while the infectee sits it out. If they’ve had contact with other people, it spirals onto other families, other places of work.

Generally speaking, people are getting on with this without too much complaint. Because they know it’s necessary and because they know that many others have it much worse. It’s humdrum and low-key, but it’s still a form of heroism.

Of course, it’s not the same as six months ago. There are no more feel-good rounds of applause. Our collective patience is frayed to almost nothing. The economic effects look increasingly stark.

The virus still doesn’t care about any of that. We are still in this together. Because we have no other choice.