Rosita Boland: Either that beard goes or she does

My father made a Faustian pact with my brother: a Concorde for his beard 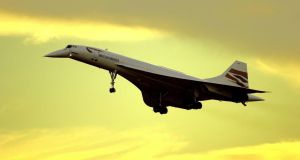 I lived for a summer near Caherdaniel, Co Kerry, and every morning we could hear a distinctive boom-boom as Concorde broke the sound barrier, flying from London to New York. Photograph: Tim Ockenden.

There I was last week, browsing around a little shop selling vintage items in Portrush, a seaside town in Antrim. This is the kind of place I love; effortlessly full of the random. There were piles of old annuals, magazines, Dinky cars, and lots of other bits and pieces.

What was that in a cabinet? I peered through the glass, my attention caught by a logo I hadn’t seen for a very long time.

The “that” turned out to be a small black paper folder, full of other paper items. The logo was Concorde, the supersonic airliner that ceased flying in 2003.

I rifled through the little shiny paper folder. There was a luggage label. A box of matches. Menus. An itinerary. A sticker with the date December 11th, 1985. “John Player World Tour on Concorde”, was printed on most of the items.

The menu included the “Concorde Brunch” which was “Lightly scrambled eggs enhanced with sevruga caviar, enveloped in thinly sliced smoked salmon”. Wines included a Cuvée de René Lalou Millesime Champagne: “A prince among champagnes – a privilege to drink and a rare gift to receive.”

The cigars – this was the era when people still smoked on planes – were Jamaica Macanudo.

I only saw Concorde once. I was flying into Heathrow from some adventure, and there it was on the apron beside us, that long distinctive elegant shape. I often heard Concorde, though. I lived for a summer near Caherdaniel, Co Kerry, and every morning at about 10.30, we could all hear a distinctive boom-boom as Concorde daily broke the sound barrier, flying from London to New York.

That summer, I was living with my brother, who had actually been on Concorde. Back in 1977, Air France Concorde arrived for a week that May at Shannon, so nine pilots could train there. The training was to practise taking off and landing, while making short circular flights in between. My father, Joe, who worked in local government in Clare, was invited to come on one of these training flights. And he could bring a guest with him. Just one, though.

When our household heard about this, uproar ensued. Lobbying eventually came down to me and my older brother, who was – and is – fascinated by engines, cars and all things mechanical.

I had never actually been on a plane of any kind at that early stage in my life. But I already knew I wanted to fly on as many as possible once I was no longer a child, and I badly wanted that first flight to be on Concorde.

In the end, I was deemed to be too young for the experience, and the opportunity was offered to my brother. On one condition.

At the time, my brother was a teenager who had recently grown a magnificent beard, much to the consternation of my father. My father made a cunning Faustian pact with my brother: he could come with him on Concorde – but only if he shaved off the beard.

My brother was both fond and proud of his beard. He grumbled and muttered and groused. I was temporarily hopeful that the intransigent beard situation might mean my own ticket to Concorde.

Of course he shaved it off. The two of them went off together to Shannon one morning, and Concorde rose up over Clare on a May day in 1977.

The fantastic irony turned out to be that my brother absolutely hates flying and very rarely ever does it. Whereas I did duly go on to fly on many planes and travel the world; a world sadly now temporarily inaccessible to most of us.

I bought the vintage shop packet of paper paraphernalia for £20. The owner told me he’d got it locally; from a businessman who had been invited to go on this particular trip for marketing purposes.

Back in the hotel, I examined all the bits and pieces. It soon became clear that they all referred to one return trip, taken on Concorde from London to New York between December 11th-12th, 1985. Guests were put up for the night at the Marriott Marquis Hotel on Broadway (which is still operating). They were given a 90-minute “presentation” before a lavish dinner and endless drinks.

Some internet digging later, I discovered that this trip was to promote a competition within the drink and tobacco industry; a competition run in 1986 by John Player Tobacco, in conjunction with Concorde.

Punters – who had to be smokers – could enter to win two tickets for the first ever Concorde Round The World trip. Covering 26,449 miles over 16 days, the itinerary was London-New York-Oakland-Honolulu-Guam-Hong Kong-Bali-Colombo-Bahrain-Cairo-London. It departed in November 1986.

I was only delighted with my Concorde cache. I might even present the menus to future dinner guests.

As for my father’s Christmas gift in 1977 from my brother, it was a bulky envelope containing the hairs of his shaved-off beard. Which he had, of course, grown again by then. A beard he still has.