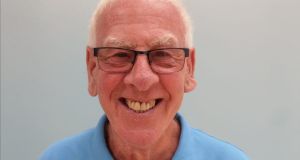 Ken McDonald is climbing Carrauntoohill today, and carrying while he does it a rowing machine weighing about 30kg, to help children’s charity Share a Dream Foundation, based in Limerick city. McDonald, an instructor at the Garda College in Templemore, Co Tipperary, intends to row 10,400m on the machine once he reaches the top, to raise funds for the charity.

McDonald was inspired to do so after he met the charity’s founder, Shay Kinsella, three years ago. Kinsella, who has died aged 79, was, he said, “a man for whom one four-letter word suffices: love.” McDonald spoke of Kinsella’s “ability to literally come down to the same level as little children, doing so even in the past year when he had mobility problems”, so that he could talk with them at eye level about what dream it was they wanted to have realised.

These children are either severely ill or affected by ongoing serious health issues. The idea to establish a charity to help such youngsters fulfil a dream came to Kinsella in 1989 when he met a girl aged nine who was suffering from leukaemia, who subsequently died.

The dreams Kinsella helped thousands of children to realise included meeting a favourite TV celebrity, or undertaking a journey to Disneyland. Eventually, Share a Dream would develop the resources to build Dreamland, a children’s recreational centre in Limerick, which, Kinsella’s son John explained this week, was deliberately designed to provide “interactive play, whether it be in a ‘shop’ or ‘an airport’ or ‘a Garda station’ or whatever,” where children with health problems could role play in settings that mimicked real life but with facilities small enough to suit their size.

Mini Garda station
The “Garda station” at Dreamland, complete with its own cell – a copy built by McDonald, originally a fitter by trade – a Garda blue light sign and a real former Garda bike whose lights and siren are activated by children’s touches, and with mini Garda uniforms for the children to wear, was put together by McDonald, and opened last year by Garda Commissioner Drew Harris.

Kinsella, one of this country’s most notable social entrepreneurs, was an aeronautical engineer by profession. He was born the son of a Garda sergeant, Larry Kinsella, and his wife, Mary Ellen Kinsella (nee Deegan), a seamstress, in Thurles, Co Tipperary, in 1941. He grew up on a farm after his father’s retirement from the Garda, at Camolin, Co Wexford, after primary schooling at CBS Thurles. It was a large family of 12. At 18 he joined the Army’s apprentice school at the Curragh, and in due course qualified as an aircraft maintenance technician, a service followed by perhaps another life-influencing series of events as an Irish soldier serving on peace keeping missions during the later stages of the Army’s UN service in the Congo, and later in Cyprus, until he left the army in 1969.

After a period as a mechanic at the Mount Congreve estate in Co Waterford, tending, as his son John recalled, “a fleet of Bentleys and Rolls-Royces”, he joined Aer Lingus as an aircraft technician at Shannon Aerospace.

The decision to move to Limerick, where he worked until retirement, was perhaps influenced by his marriage to Amy McInerney, a Limerick native, which he thereafter made his permanent home.

Music and basketball
Immersing himself in the life of his adopted city, he became a co-founder of the Limerick Lady Festival in the late 1970s, with John Loftus and others. The festival team commissioned Denis Allen to compose one of the Treaty city’s iconic anthems, Limerick You’re a Lady, which became a hit nationally.

Kinsella was very physically fit, and a passionate basketball player, both in the Army and later at senior levels with the Atlantis club in Limerick. He excelled also as a coach of the club’s under-19s girls’ team, which went on to win national titles under his tutelage.

He played senior men’s basketball with the club into his late 40s, at one stage playing on the same team as his sons John and Damian.

Kinsella’s later work with the foundation he established included the creation of the National Children of Courage Awards, presented annually by celebrities to children who have overcome, or struggle with, significant health challenges.

Shay Kinsella is survived by his widow, Amy; children John, Damian, Anthony and Sheena; and his siblings, Ena , Josephine , Phyllis, Teresa, Patjo, Frankie and Declan. His brother Vincent and his sisters Kathleen, Noeleen and Lily predeceased him.