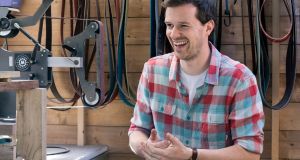 Hugo Byrne - ‘With a knife, it has to work before you decide how it’s going to look’. Photograph: Doreen Kilfeather

Hugo Byrne goes slowly. Otherwise the blade might lose its temper. Thoughts of sharp objects losing their tempers could lead you to worry about bloody carnage, but Byrne is at work, painstakingly grinding hot metal to make one of his highly covetable kitchen knives. The blade must be dipped in water frequently. If it gets too hot, it will lose its hardness and strength - the temper of the steel.

The son of artists and craftspeople – artist Mary Nagle and ceramist Mike Byrne – making was always on the cards, although a stint at the National College of Art and Design (NCAD) almost put him off for good. “I had a very liberal and creative childhood,” Byrne says of his time growing up in Co Limerick. “It was very free, though if I had said I wanted to become an accountant, I would probably have had a hard time.”

“I’d gone to NCAD to make things,” he says. “But I was quite disillusioned with the whole scene.” Instead, he did what many a disillusioned graduate has done before him, and took up waiting tables - at Ranelagh’s Tribeca. “The restaurant was great craic,” he says. “But it was hard to keep your creativity up. So I designed a few chairs. They were really uncomfortable,” he adds with a wry laugh. “But it was really good fun, so I made three more and perfected them. That got me excited about making things again.”

The excitement lead Byrne to take up an internship at Conservation Letterfrack (conservationletterfrack.ie). “I didn’t know anything about conservation,” he admits, “but I was seduced by the fact it was a workshop.” As we talk, Byrne in his studio in Limerick, me in my kitchen in Waterford, his sense of excitement, enthusiasm and joy is infectious. I begin, wholeheartedly to wish to be there too, having a go at grinding steel - which is strange, as it had never previously been a desire of mine.

Working on turning some offcuts of walnut into chopping boards lead Byrne to his life changing revelation: “It felt really weird to design a chopping board without a knife. Like a cart without a horse.” But there was more to it than that. “I would only have been decorating the board. With a knife, it has to work before you decide how it’s going to look.”

Getting stuck in to the challenge, a perfect blend of physical, intellectual and aesthetic, Byrne made three knives. “I had a great time, but what I didn’t expect was when I brought them home and prepared my dinner - it was a real ‘ah-ha’ moment. I made it, and now I get to use it every day. It was what I had been missing in art college, where nothing is ever used, nothing is functional.” He loves the feeling, he says, of making: that something that wasn’t there in the morning exists now, because of him.

Byrne still uses his first knife, but has since refined his techniques. “The research was tricky, everyone is telling you how to do it in a million different ways. The internet is amazing, but it’s too vast.” Instead, Byrne found a book that suited him, and also took advice from Ennistymon-based Sam Gleeson (thisiswhatido.ie), who, in turn, learned with Fingal Ferguson in Gubbeen, Co Cork (fingalfergusonknives.com). “The guy who’s been doing it for 10 years longer is always going to be a font of information,” Byrne says with a mix of fascination and reverence.

Our conversation turns to talk of processes. But, before we get lost in the intricacies of Damascus Steel and Pattern Welding (where the metal is multi-layered, and folded before being acid-etched), I want to know what makes a good knife, and how many do we really need?

Assuming your knifemaker knows their business, you’ll have a blade that keeps its sharpness, so after that, it’s all about the balance and the handle. “Balance is a personal thing among chefs,” says Byrne. “In general it should be up around the top of the handle. If you’re using a knife 10 hours a day, that’s when it starts to make a real difference. You find you automatically reach for the tool you like using. It’s down to the weight, the heft, it feels right in your hand.” Handles are made from a mixture of found wood and ocean plastic. They are beautiful.

Shamefacedly, I tell Byrne about my own cheap knife block, and ask him if I really need that many. “Anthony Bourdain said you only need one,” he tells me. “But if you’re cutting cheese in the sitting room, you’re probably not bringing out the big ones. It’s not a need, it’s a want,” he continues. “It’s a cool, exciting thing. Food has never been more popular and that’s bled over into the tools we use in the kitchen. People care about the things they use. They see the value in decent food and the pleasure of cooking.”

They clearly do. Fingal Ferguson has closed his waiting list and the wait for Byrne’s is about nine months. “I’m trying to make three or four a week,” he says. I put my name down there and then.

Byrne’s work is part of Generations, now online at the National Design and Craft Gallery (ndcg.ie). A video of Byrne at work has been commissioned for #GetIrelandMaking, a new series of online workshops and craft demonstrations at the Design and Crafts Council Ireland (dcci.ie). Byrne’s knives start at €160. hugobyrneknives.com