‘The best friendships are built on business’ 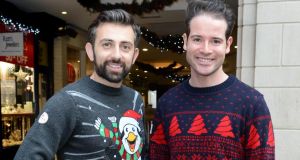 Donal and I met in the West Wood gym in Clontarf. I used to think I was a bit of a weightlifter and was struggling one day underneath the bench press. He saw me being crushed by a bar bell and saved me. I would have seen him around before but we got chatting after that, would see each other a bit more. I was 25 then, he’s about four or five years younger.

After we first met properly, we probably trained together a lot more. I would have seen him out and about in town, found we had a few friends in common, did a bit of socialising. I’d just started the Christmas jumpers business: we got chatting about it and he said, ‘if there’s ever room for me to get involved, I’d be interested’. Myself and the other lad, Ciarán, who was involved in the business then, thought, Donal’s a nice lad, has good connections, a good sense of style, looks like a hard worker – let’s take him on. That’s where it started and it turned out to be the right fit.

Donal’s a sociable guy, I’ve never seen him in a bad mood. I’m the more moody one now; he comes in in the morning, smiling. Donal has skills that I don’t have. He has no shame – in a good way. He’s not embarrassed to say or do anything; if there’s an opportunity, he won’t hold back. I’m a bit more reserved. If he sees someone famous coming down the road, he’ll go straight up to them. Famous people who have our jumpers include Niall Horan, Harry Styles and Rita Ora. Tony Hawk, the world’s most famous skateboarder, was in our store two weeks ago.

My parents are Italian, came to Ireland when they were young and met here. They run a takeaway business beside DCU. I did a degree in software engineering/computer programming then travelled for a while after college. I worked in the family business, started mytennistracker.com, but was short on experience. Some friends used to wear Christmas jumpers every year; me and my friend Ciarán Byrne couldn’t get them anywhere so we decided to make our own. We got designs done up and found a Chinese company to manufacture them. We have a naked Santa jumper, superhero ones, and a three kings jumper where they’re holding a hurley, a rugby ball and a pint of Guinness.

Donal has moved to the UK now, taken on another exciting job and is working on this at nights and weekends. But we’ve often talked about starting other businesses and we’ve plenty of ideas. They say the best friendships are built on business because the boundaries are set already: if I’m dealing with you on a business level and friendship grows from that, it has a better chance of lasting.

Donal McSharry got involved with the Funky Christmas Jumpers company while still in college. He now works in sales and marketing for a construction firm in London, commuting to Dublin to work with the jumpers firm. Originally from Clontarf, he now lives in London

I rescued poor Fabio from under the bench press in West Wood gym, yes. What struck me about him was that similar to myself, he had drive and ambition. I was 21, a young broke student; Fabio had just graduated from college. I was reading a lot of books about people like Richard Branson and had a burning desire to start my own business. Fabio was a few years on, had developed websites successfully. We saw an opportunity for a business and it developed into a friendship. Now we play bad golf together, enjoy going out for a meal and I really enjoy popping up to his family’s chipper every now and again.

I grew up in Clontarf, did a degree in Business & Management in DIT, then a masters in marketing in Smurfit Business School. It was seven years ago when Fabio approached me with this Christmas jumper idea. The first two years, we picked the designs, did a photoshoot, lots of flyering, getting photographs out and about, meeting people in bars and clubs; there was a lot of drink involved. We did direct marketing because we had no other means. Social media wasn’t so developed.

It’s true that I’m shameless, our personalities are quite different. Fabio works quietly but very hard in the background. I’m more inclined to hunt down the celebrity endorsements we’ve became famous for – like getting the One Direction guys to wear our jumpers, and Scott Disick of the Kardashian family. We sent a jumper with his name on the sleeve and he wore it on Christmas day. We’ve done jumpers for Rita Ora and for Rory McIlroy’s Christmas party. I have recently been in touch with the Beckhams’ PA, giving the 60-second elevator pitch.

My parents never gave me handouts . . . my dad was self employed in the construction business, so nothing happened without us working hard. I was always trying to make pocket money, later worked on building sites.

I’ve recently moved to London, working in sales and marketing with a big construction company. Since August, I’ve been working three or four hours online at home on the Christmas jumpers business after a day’s work, and fly home every weekend.

I’ve been in business with Fabio for six years: we’re always looking out for new opportunities. Being in London gives me a new international perspective on ideas – and Fabio’s amazing at executing ideas.

Fabio’s pushed the boundaries on some of the jumpers, like the naked Santa. I like our Fair Isle range, it’s a bit more classic, the gentleman-drinking-whiskey-around-the-fire-jumper. Fabio’s fashionable, it’s in his genes. I enjoy style and fashion, would say I’m probably more au fait with trends. I like clothes; Fabio has a weakness for watches.