Beerista: Brickyard, in Dundrum, has 24 taps, with a focus on top-notch Irish brewers 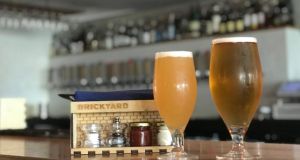 There’s a perception out there that some bars dedicated to craft beers can be a bit unwelcoming – if you don’t know your stuff. The best of them, however, have staff with a talent for friendly, easy-going conversation about everything from the weather to what beer to choose.

“If you’re a neighbourhood bar it needs to be down to earth,” says Erwin Pollard, owner of Brickyard Gastropub in Dundrum in south Dublin. “I’d know most of our customers – and that’s something we’ve built over time.”

Since they opened their doors in 2017, they’ve had a steady flow of customers locally and beyond, which Pollard puts down to being lucky with his staff, who all have an interest in learning about beer but “no notions”.

There’s a row of 24 taps along the back wall but you won’t see a badge or brand name. “I didn’t want the place to be about brands but about products and services,” says Pollard. And while you will find some of the macro beers on offer, there’s a constantly rotating and carefully selected line-up of Irish microbreweries. “I wanted to give local brewers – like O Brother, Wicklow Wolf, Rascals – an opportunity to sell at the same level as the bigger players.”

Brickyard also sells its own house beer, which is a partnership with 57 The Headline and brewed in Bluebell, in Dublin, by ThirdBarrel Brewing. “I was a bit dubious about the idea [of house beers] at first, but it’s been a massive success.”

Their Brickline pale lager has helped some of their customers move across to craft beer, he says. “A big part of it has been talking to our customers and letting them know it’s our own lager, that we’re involved in the brewing of it, and we know what’s in it.

“Two Yards is a fruity session IPA. I think that’s been our biggest hit so far – and we’re hoping to do some canning of it as well.”

Irish family stuck in Cyprus: ‘We hope our flights home are cancelled’
8