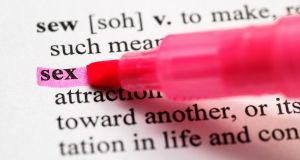 Let’s talk about sex: not just as a list of dire warnings. Photograph: iStock

I was having a conversation with a friend recently about our sprawling family trees. He told me about a member of his extended family, who was a grandparent by her 30s.

“How did that happen?”

I thought about the lots and lots of people having lots and lots of sex recently, as I retrieved Busy Bodies, the sex education book for primary schools from the bottom drawer of my bedside locker. It is the boy’s turn soon. He has asked if he can be off sick that day. He recently had a haemorrhage in his eye after an altercation with a hockey stick, and he has had enough of bodily fluids.

I can’t remember what I was expecting when I trooped off to an information meeting with other parents last year and collected my copy.

I regularly claim that, having been educated by Quakers – second only to the French in the global rankings of unselfconsciousness about all aspects of the human body – I cannot be embarrassed. Try me, I say to my children rashly. Ask me anything.

Nope, they say firmly. We’re all good, thanks. I’ve found that if you want your children to never, ever talk to you about sex, you just need to act slightly too enthusiastic about the prospect.

But the truth is that the nuns had me long before the Quakers did. And that night, for some reason, the bit of me educated by the nuns took over. I don’t know if it was the bright lights of the halla, or the timeless, cheese-flavoured-socks smell that seems to permeate the corridors of every school I’ve ever been in, or the statue of the Virgin Mary looking down (I can’t remember if there was actually a statue of the Virgin Mary, but whether she was there or not, I could feel her painted black eyes boring through me).

Whatever the reason, I was suddenly back in 1987. I sank inside my parka and hoped the very sensible, and genuinely unembarrassable trainer wouldn’t ask me anything.

The curriculum is thorough, insofar as it goes. It covers the changes wreaked on the human body during puberty. It talks about hormones and periods and body hair and spots and washing and drinking enough water and folic acid.

It was only when I got home and looked through the book that I noticed all the things it doesn’t manage to get to. It doesn’t mention the likelihood that, amid all the lots and lots of people having lots and lots of sex, there’s a significant proportion who would prefer to do it with someone of their own sex. It doesn’t mention that some children are confused about their gender identity – or that they’re not confused at all, they just don’t recognise it as aligning to their birth sex.

Consent gets only the briefest mention – literally, “17 is the age of consent in Ireland” – despite the fact we now have a very useful definition of it in our statute books.

It doesn’t talk about pleasure or fun at all, only that “having sex is a very special thing to do with a person you really love and trust”. Elsewhere it says, a bit confusingly, “the woman doesn’t feel this part and she can’t see it either” – which is the kind of thing I could imagine the nuns choking out in 1987.

An Oireachtas Joint Committee on Education and Skills has called for a “modern” approach on how relationships and sexuality are taught in classrooms. The revised programme should be “fully inclusive of the needs of LGBTQ+ students as well as those with special intellectual needs”, delivered by trained providers, it said.