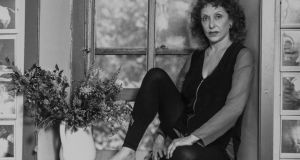 When the artist Carolee Schneemann, who has died aged 79, first exhibited in Paris in 1964, a shocked Marcel Duchamp declared the performance the messiest work of art that France had ever witnessed. Meat Joy featured half a dozen men and women, semi-nude and plastered in red paint, writhing with dead fish and raw chicken, as well as each other.

“Sensuality was always confused with pornography,” Schneemann later said of Meat Joy. “The old patriarchal morality of proper behaviour and improper behaviour had no threshold for the pleasures of physical contact that were not explicitly about sex.”

Strapped naked into a tree surgeon’s harness hung from the gallery ceiling, the artist stretched out to draw wildly on the walls in crayon

The American artist, who described herself as a painter but who worked in various media as well as making her extraordinary performance pieces, was for decades ignored by critics and museums. Nonetheless, Meat Joy and other equally uncompromising works established Schneemann as a key figure in the history of feminist art and avant-garde performance. On hearing she was to be awarded the Golden Lion for lifetime achievement at the Venice biennale in 2017, she responded: “It’s made me very depressed and confused. I’m used to working with neglect and misunderstanding.”

In the 1960s, Schneemann had entered an art world which was then in thrall to abstract expressionism and the macho men of painting. Up to and Including Her Limits, which she performed for three years from 1973, nods towards her frustration at the time. Strapped naked into a tree surgeon’s harness hung from the gallery ceiling, the artist stretched out to draw wildly on the walls in crayon. The 1974 performance Interior Scroll involved her, again naked, declaring, “If you are a woman (and things are not utterly changed) they will almost never believe you really did it . . . they will patronise you, humour you, try to sleep with you,” before quoting specific slights levelled at her work, read from a roll of paper pulled slowly from her vagina.

Born in rural Fox Chase, Pennsylvania, to a doctor father and a homemaker mother, with grandparents who were farmers, Carolee became accustomed to the sight of bodies and blood. Her father was delighted that his daughter took an interest in anatomy, but less enamoured when she announced her intention to go to art school. At the age of 12 she had used babysitting earnings to pay for a trip to Philadelphia, where she had stumbled upon a painting class at the city’s museum. Two years later she won a scholarship to the liberal Putney school in Vermont, but her parents pulled her out, fearing its progressive values.

However in 1955, aged 16, Carolee gained a full scholarship to Bard College, upstate New York, and she left home for good. She adopted the surname “Schneemann”, explaining in a 2009 interview that, “Part of my identity is separating what I had to do from what was hoped for, anticipated, and expected of me. So I try not to engage my family”. She never revealed her real name.

Her time at Bard was turbulent. She was suspended after a year for “moral turpitude”, having painted a nude self-portrait with her legs spread apart. She spent a year at Columbia University where she met James Tenney, a musician studying at the Juilliard School, whom she married in 1956, before returning to Bard to graduate in 1960.

The couple moved to Illinois that year to pursue graduate fellowships. It was in their rickety house in the small town of Sidney that she staged her first performance work. After a tornado had wreaked havoc on their property one night, Schneemann invited 10 friends over and handed out cards that instructed them to negotiate the litter of fallen trees. She titled this natural assault course A Journey Through a Disrupted Landscape. It was only afterwards that a friend told her about the New York artist Allan Kaprow and his concept of “happenings”. She duly wrote him a letter and he invited her for lunch. The meeting was to prove critical.

The same year she took part in Store Days, Claes Oldenburg’s happening in an empty shop on the Lower East Side, in which Schneemann was tasked to stab the wall repeatedly for several hours, and became a founder member of Yvonne Rainer’s Judson Dance Theater, later performing in works such as Site (1964) by Robert Morris. In 1966 she featured in Yoko Ono’s notorious Film No.4.

For herself, that year she staged Water Light/Water Needle, in which performers had to negotiate tightropes set up in St Mark’s Church in the Bowery, and Snows at the Martinique Theatre (1967), a protest against the Vietnam war.

In 1963 she invited art dealers to see her work but they found her art, Schneemann would claim, “repellent and obnoxious”. Instead, the Icelandic pop painter Erró, who had taken the pictures for her Eye Body series (1964), where her image was broken by shards of glass, suggested she take part in Jean-Jacques Lebel’s Festival of Free Expression in Paris that year. Schneemann bought a plane ticket and put on Meat Joy at the American Center on Boulevard Raspail. “It was a scandal and a huge success,” she recalled. The work was restaged in London and then back in New York.

The same year, Tenney and Schneemann moved to New Paltz, upstate New York. There she filmed Fuses, a work made in the three years leading up to their divorce in 1968, capturing the couple having sex on multiple occasions, seemingly from the point of view of Kitch, their cat. The lab would only process the 16mm film if accompanied by a letter from a psychiatrist, which a friend agreed to do.

She exhibited intermittently over the next 20 years, more often at festivals and university galleries, with few solo exhibitions. In the 1990s, however, a renewed interest in the fluxus movement and a reassessment of female artists meant Schneemann was included in several survey exhibitions including In The Spirit of Fluxus (1993–95) and Hall of Mirrors: Art and Film Since 1945 (1997).

In 1996 Schneemann had a retrospective at the New Museum, New York, and in 2001 the Cornerhouse in Manchester staged More Wrong Things, a solo show. A retrospective, Kinetic Paintings, toured the Museum der Moderne Salzburg and Museum für Moderne Kunst, Frankfurt, before closing at MoMA PS1, New York, last year.

A second marriage, to the artist Anthony McCall, ended in divorce. She is survived by a brother and a sister.