Elon Musk has called his child what? Baby ‘X Æ A-12’ arrives

Take it from me, giving your son or daughter a distinctive name isn’t for the faint-hearted 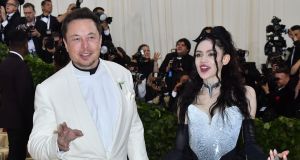 What’s in a name? Elon Musk says he and Grimes have called their son X Æ A-12. Photograph: Angela Weiss/AFP via Getty

I had an inkling he might not be christened David, Paul or Michael, but when Elon Musk and Grimes announced the name of their first son together I needed to do a double take. Even by celebrity standards, X Æ A-12 is quite the audacious moniker. It seems this is possibly pronounced X Ash Archangel. Rumours abound that Musk, the chief executive of the Tesla car company and the SpaceX starship company, might be joking about his newborn son’s name. Worse rumours abound that he might not.

In any case, I have officially relinquished the right to pass judgment on anyone’s singular baby-name choice – even one made up of numbers and squiggles. I suspect you’ll have to tread some ground to find another baby Isola, which is what I named my daughter, in Ireland. After hearing the name – the Italian for Island, and the name of Oscar Wilde’s sister – in the 1990s, I fell madly in love with it.

My partner did not. “You can shorten it to Izzy if you like,” I offered as a bargaining chip. He softened up when he realised there were reportedly half a dozen Isolas knocking about Dublin during the 1916 Rising.

In addition to Izzy, Isola is pronounced several ways by everyone around her. Some rhyme it with Zola, others with Rizla. Still more, pronouncing it the Italian way, call her Eesola. I figure she can choose whichever she likes when she’s older.

Giving your child an unusual name if you’re not a rapper, psychedelic musician or award-winning actress is not for the faint-hearted. Reactions range from the quizzical to the ‘woah, notions’ smile to the downright nonplussed. Unless you’re my no-nonsense Northsider neighbour, who simply huffed and growled, “Ah, for Jaysis’ sake!” when he heard it first.

You will hear “spell that for me?” more times than you’ll care to remember. You will have to explain its origin on a metronomic basis. You will have to explain why you decided to give an innocent child who did nothing wrong such an unusual name a little less often, but often enough. Soon, Isola simply becomes “the baby” to people asking after her in polite conversation, because very few can remember her name.

I sometimes wonder how Isola will get on later in life with an unfamiliar name – is she destined to be forever mistaken for a coronavirus baby? – and I reckon she will probably be just fine. Besides, it’s not like I’ve called her Microwave or Pringles or Rothmans. I’ve known Demelzas, Rioghnachs and Solanges, and they wear their lovely unusual names with elan.

I didn’t give my daughter her name to make her stand out from the crowd. It isn’t a fashion statement. I just love its jumble of letters, its cadence, its romance. I don’t care if you think I’ve got notions til Tuesday. I see the letters I-s-o-l-a and all I see is love. Perhaps Elon Musk feels exactly the same way.