Caroline Calloway: From self-styled ‘scammer’ to queen of quarantine horniness 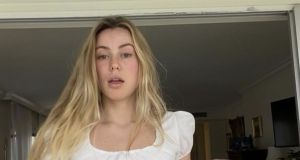 So who the hell is Caroline Calloway? Some sort of internet superstar, we gather

After a fashion. Born Caroline Gotschall in Virginia, Calloway came good on her dream of becoming a writer by sharing her life story on Instagram. Clearly, she was doing something right – by 2017 her following had ballooned to 800,000. With ABC calling her “the envy of Instagram”, Calloway announced that she’d scored a six-figure book deal to write her “Instabiography”. When the deal reportedly fell through, Calloway then decided to host creativity workshops across the United States.

Until you dig deeper, as the journalist Kayleigh Donaldson did. For $165, or about €155, Calloway was offering four-hour seminars on “how to be yourself”. A bit like the Fyre festival the same year, they fell rather short of expectations, with Calloway seemingly cutting corners, coming up short on the catering and generally unprepared to host sizeable events. “I think it’s categorical bullsh** that nobody is talking about & that we glorify this ‘influencer’ nonsense,” Donaldson wrote, effectively hitting on a cultural raw nerve. While the internet deemed her a scammer, Calloway doubled down, inviting people to a second live event, called the Scam, where people could “drink oat milk” and “discuss self-love”. Oof.

So she didn’t take herself off social media, unlike many scandal-hit people?

Nope. In fact, a spectacular own goal soon followed, when she posted that “one of the two people I have hurt the most in this world will be publishing an essay about our friendship for The Cut”. Sure enough, when her friend Natalie Beach published her essay on the website, things went a bit nuclear. In it, Beach claimed that it was she who wrote the Instagram posts that made Calloway a star. Twitter had a field day, and Calloway gained a reputation, fair or otherwise, as the internet’s best-known grifter.

Sounds like she had an interesting 2019. Why should I care now?

Earlier this month, Calloway had her own say on Beach’s viral article and the entire “scamming” fandango (naturally behind a paywall, albeit one for which proceeds are going to organisations fighting Covid-19). For all her shortcomings, Calloway hit on an interesting point: “If you build a life around an identity that springs from your own imagination, is it ever inauthentic?” Whatever about the entire saga, this one line seems to hook something on the prevailing winds of influencer culture.

It seems that you can’t keep a good, or even a middling, influencer down

Exactly. Bloodied but not unbowed, Calloway has repositioned herself as a different kind of social-media presence. It’s out with the kale and rose crowns and in with the XXX-rated stuff. Calloway has launched a profile on the subscription-based OnlyFans social-media site. Her plan is to make $80,000 by year’s end as Instagram’s queen of “quarniness”, or quarantine horniness. “I’ve been trying to dole out nudity on my account in really thoughtful ways,” Calloway is quoted as saying after posting a nude to Twitter to herald the creation of her OnlyFans account. “I thought, Wouldn’t this be an interesting and fascinating moment to make it even harder for people to see my brains?” She’s not wrong there.

Wow. That doesn’t sound like influencer behaviour to me

You’d be surprised. With brands pausing their sponsored posts and influencers struggling to make coin from promoting products, some social-media movers and shakers are pivoting towards the hornier reaches of the web. With people happier now than they were in the past to talk openly about sexuality, this has “led to a lot of people becoming more comfortable with being horny online”, observes Taylor Lorenz of the New York Times. And, often, posters are happy to talk about sex on their main accounts, not just their Finstas, or secondary, fake Instagram accounts. For Calloway, her personal brand has shapeshifted from “scammer” to something more “real”. Now she lives in New York’s East Village and has taken up painting. “There are few things I could do to make the literary scene take me less seriously than become an Insta-famous girl who is nude online,” she told Mel Magazine earlier this month. “But f*** it, that’s what I want to do. There’s always something uncool about what I do.” Yet shades of the erstwhile Calloway remain, for she is also finally working on her first book. Working title: Scammer.