Eileen Flynn: ‘Travellers are anything but stupid’ 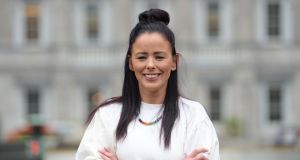 Eileen Flynn: ‘A lot of my teachers believed in me.’ Photograph: Alan Betson / The Irish Times

A member of the Traveller community, Ballyfermot-born Eileen Flynn was no stranger to challenges from a young age. Twenty years ago, when she was just 10, her mother died from pneumonia. A few days later, Eileen endured multiple injuries in a serious car accident.

“There was so much going on in my life at that time,” Flynn told Róisín Ingle, in the first instalment of a new series of the Women’s Podcast Big Night In – a live video chat hosted by The Irish Times.

“I was going back for operations every few weeks. Looking back, it made me the person I am today.” Recently, she met some of the doctors and nurses who treated her at a young age. “They said to me, ‘I knew you’d do well’,” Flynn recalled.

At 30, Eileen Flynn became the first woman from the community to be appointed to the Oireachtas (although initially, she had intended training as a nurse). She and her twin sister Sally were also the first residents of Labre Park, one of the country’s oldest Traveller accommodation sites, to access third-level education. In Eileen’s case, she graduated with a degree in community development from Maynooth University, and later studied in Trinity College.

“I found first, second and third year [of secondary school] very challenging,” Flynn admitted. “But I wanted to keep going.” She was suspended occasionally for sticking up for herself, and for defending Sally, as classmates used racist slurs.

“A lot of my teachers believed in me. I remember the vice-principal said, ‘I won’t suspend you, but I’ll send you to the youth centre instead’. He was the only one that copped that I was getting into trouble because of Sally.”

Flynn noted that, despite the challenges that many Travellers face, education is prized within the community. “There are school principals, and doctors out there who are members of the community, but you have to hide your identity,” said Flynn.

Speaking from her home in Donegal, and with her baby daughter Billie chatting away in the background, Flynn also opened up about her experiences within the maternity services as a Traveller last year.

“I suffer really bad with anxiety, and during pregnancy my anxiety was through the roof,” she said. “ I didn’t feel like the hospital met me where I was at. Sometimes doctors would think you can’t read or writer, and they’d say stuff in a patronising way to people. It was a very negative experience.”

Flynn also addressed Sen Róisín Garvey’s comments this week, in which she noted that party members need to “choose their words” and not use “big words” while trying to appeal to Traveller voters.

“Last night when I read it, I laughed. It was such an innocent comment to make,” said Flynn. “I know Róisín, and I know she’s a good-natured person – she’ll get up and speak about issues that will impact the Traveller community. But how it was worded was very wrong. I felt it was making Travellers out to be thick, uneducated people.

“I understand the world ‘inclusive’ and I understand what Róisín means when she says, ‘speak the language [on the doorstep], where people are at, without making people out to be stupid. Especially not Travellers, because we’re anything but stupid.”

Flynn overcame plenty to blaze a trail in the political sphere, yet doesn’t believe the adage that people can be anything they want to be if they put their minds to it.

“I was in the school last week with young Traveller women, and one girl, about 12 years old, said to me, ‘Travellers will never be anything’. I’m still hearing that today.”

The Big Night In, sponsored by Green & Blacks, is a series of six live events hosted by Róisín Ingle in conversation with “inspiring , entertaining women”. They take place on Saturday nights from 7 to 8pm every fortnight until December 12th. Still to come are writer Caitlin Moran, broadcaster Claire Byrne, Glamour editor-in-chief Samantha Barry and former state pathologist Marie Cassidy.

A single ticket for all events costs €50, or special price of €25 for Irish Times digital subscribers. To purchase tickets and find out more, please go here.