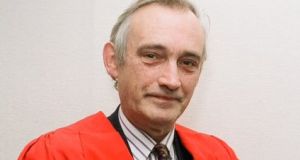 Dr Ronan O’Regan: an internationally recognised expert on a tiny organ which regulates the levels of oxygen in the body.

The career of Ronan O’Regan, dean of the school of medicine at UCD from 1991 until 2000, who has died aged 82, went largely under the radar of the public consciousness of this country. However, as the person who arguably more than any other created the medical school today at Ireland’s largest university, his work stands out, on examination, as among the most significant in the medical history of the State.

O’Regan became an internationally recognised expert on a particularly arcane area of medicine, the carotid body, a tiny organ which regulates the levels of oxygen in the human body. His colleague and former pupil, Prof James Jones, now professor of anatomy at UCD, told The Irish Times that, after O’Regan’s return to Ireland to teach at the university in 1971, he conducted experiments in this area “so technically difficult that few could understand them”. He added that as recently as June of this year these experiments were still being cited by peers internationally dealing with the subject.

In 1984, O’Regan was appointed to the chair of physiology at UCD, and also served two years as president of the Royal Academy of Medicine in Ireland, 1995-1997.

What will undoubtedly be his lasting monument, however, was the development at Belfield of UCD’s new school of medicine during the 1990s. This involved difficult negotiations involving both, at first, reluctant colleagues, and the government, which was to effectively finance it. The ever-innovative O’Regan, however, found a new– and for its time controversial – source of income, the attraction of overseas students, especially from North America and Asia, paying high fees.

His long-time colleague and former student, Dr Philip Nolan, chairperson of the epidemiology monitoring group for the National Public Health Emergency Team (NPHET) on Covid-19 and current president of NUI Maynooth, said O’Regan saw the need to internationalise both the student and the teaching and research bodies at the school.

“At the time Ronnie [as O’Regan was known to family and friends] was appointed dean of medicine in 1991, UCD’s medical school was well-run but conservative. It wouldn’t have been seen as innovative and needed a shake-up . . . It took a huge amount of negotiating, both here and internationally, to gather people around him to persuade the [relevant] people” to effect the necessary changes.

“Ronnie had an international outlook from the beginning. He had wonderful international contacts, and a way of looking at how other people around the world were doing things. History has proven him right; today there are about 240 new entrants each year to the school; when he started there were just 110, almost all Irish with a small number from the UK and elsewhere. The research faculty has tripled in size.”

These changes have meant new perspectives and experiences for UCD’s medical school, including a joint venture to establish a medical school in Penang, Malaysia, and a much stronger research imprint in medical scholarship both here and abroad.

The second big task was the move from Earlsfort Terrace in central Dublin to purpose-built facilities at Belfield, which again taxed O’Regan’s diplomatic skills. O’Regan’s negotiation proposed also to simultaneously solve three other urgent problems at that time, the need to bring UCD’s scattered schools of nursing, physiotherapy and digital imaging to one place (at Belfield), an innovation which saw nursing made a proper professional degree, and the latter two schools moving, respectively, from the Mater and St Vincent’s hospitals. Each of these complex issues had to be negotiated separately, and a business case made for each move, but it was O’Regan, Nolan firmly believes, who saw the potential synergy in the changes.

Ronan O’Regan was one of eight children of Anthony O’Regan, a dispensary doctor in Glenamaddy, Co Galway, and his wife Mary (nee Gavin). Educated at St Mary’s College, Galway, and Clongowes Wood College, he graduated with a first in medicine at UCG (what is now NUI Galway) in 1961, taking also a first in his BSc in physiology there in 1963 before his move to London.

O’Regan married a fellow Galwegian, Deirdre Comerford. She survives him with their children Ruth, who is professor of oncology at the University of Wisconsin at Madison, USA; and their son Anthony, a consultant at Galway University Hospital, who is currently also dean of medicine at the Royal College of Physicians of Ireland. His sister Collette (Weare) and his brother, Enda, also survive him; he was predeceased by his brothers Maurice and Brian, and his sisters Mary, Patricia and Denise.