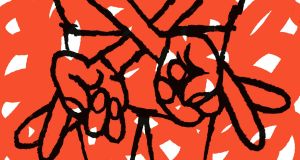 Some eight per cent of participants in one study were labelled ‘radically dishonest’. Illustration: Scott Menchin/The New York Times

In this age of trolls and bots and digital impostors, words like “crank” and “bully” seem impossibly antiquated, like labels from the black-and-white TV era. “Scoundrel” almost qualifies as a term of endearment – culturally insensitive, for the purveyors of disinformation who parade with grim delight in the virtual public square.

A more precise language is called for, a typology of lying and cheating that includes everyone, and sharpens the boundary between garden variety corner-cutting and deeper personality problems.

Psychology is here to help. In a new paper, a team of researchers in Spain has made a good start, producing a rough field guide of lying and cheating patterns, at least among participants in simple lab experiments.

“In this paper we find three different profiles of dishonesty and cheating, and within each profile, two distinct types,” said David Pascual-Ezama, the study’s lead author who is a behavioural economist in the business school at Universidad Complutense de Madrid.

About 8 per cent flipped multiple times until they got heads, and reported that result, to collect the money. This group was labelled 'cheating nonliars'

Psychologists have studied dishonesty, in various ways, from the field’s inception, and found that, like most socially censored acts, it has developmental payoffs, as well as obvious risks. Children learn to keep a secret at about age 6 or 7, for example, and learning the requisite skills of deception is a part of typical development, the beginnings of a psychological identity.

In recent decades, business-minded psychologists have investigated dishonesty in more transactional settings. How often do people lie about simple things, like a coin flip, when a dollar is on the line? How about $5 or $10? What specific circumstances make people less likely to lie?

Nina Mazar, a professor of marketing at Boston University’s school of business, has found in experiments that people are less likely to lie when forced to directly contradict a statement that is true than when allowed to fudge. “Think of an empty tax form, asking your level of income,” Mazar said in an interview. “You’re more likely to be dishonest about the income in that situation” than if the form includes accurate estimates that you are invited to correct.

The new research, led by Pascual-Ezama, Beatriz Gil-Gomez de Liano of Universidad Autónoma de Madrid and Drazen Prelec of the Massachusetts Institute of Technology, falls squarely in this economics tradition. In one experiment, they instructed some 180 adult participants to perform a single coin flip, electronically, and report the outcome. If it was heads (the colour white, in the virtual flipping game), the individual won $5; if it was tails, or black, the person received nothing.

Unbeknown to the participants, the research team could track each toss. Once the trial was run, the researchers factored out everyone who got lucky and flipped heads on the one try. The rest of the participants fell into several distinct groups. About 20 per cent were honest: They flipped tails and reported tails. Ten per cent flat-out lied: They rolled tails and reported heads, for the $5 reward. A third group didn’t bother to roll at all, and reported heads – they were “radically dishonest,” as the authors phrased it in their paper.

And then were those, about 8 per cent, who flipped multiple times until they got heads, and reported that result, to collect the money. This group was labelled “cheating nonliars.”

“This group is the most interesting to us,” Pascqual-Ezama said. “They’re willing to cheat, but they don’t lie about the last roll.”

Cheating on a dice roll, with few consequences, is a far different decision than cheating on a spouse, or lying about results to a boss

The mentality behind this behaviour is most likely somewhere contained in the ancient wisdom that holds “Heads I win, tails you lose.”

But it also fits well into a vast literature detailing the many psychological outs that people give themselves when cutting corners or breaking rules, small and large. Beginning in the 1990s, psychologist Albert Bandura called these rationalizations “moral disengagement.” It’s a process of preserving self-respect by justifying cheating or worse, with thoughts such as “Everyone cheats, why should I be shortchanged?”; or “The larger mission is more important than some small infraction.”

More recently, Mazar and Dan Ariely, a psychologist at Duke, have enriched this theory, with a concept called Self-Concept Maintenance. “These are the various psychological tricks, if you will, we play on ourselves to justify lying and cheating,” Mazar said.

In the new research, cheating in (presumed) private was one thing; but, for the “cheating nonliars,” lying about it entailed another, slightly higher threshold. “Cheating participants who toss multiple times are failing only to follow instructions to the letter,” the paper concludes, whereas lying “is a signal of a general character trait, namely, that one is willing to state something that is false for a monetary benefit.”

Finally, the Spanish and American researchers ran an additional experiment, with another 170 participants, this time giving them a (digital) die to roll; a roll of one earned $1, a roll of two earned $2, and so on; a roll of six was unlucky and netted nothing. A similar breakdown emerged of honest people, liars, multiple rollers and the “radically dishonest” – the 8 per cent who didn’t bother to roll at all and simply put their hand out.

But this time there was a wrinkle. Within each dishonest category, some people went for the full $5 while others modulated, going for $3 or $4. These people earned the label “submaximising” – they knowingly broke the rules but didn’t want to max out the reward. “The fact that they did not claim the maximum reward outcome may provide some protection” to their self-concept, the authors write.

Pascual-Ezama said that coin flips and dice rolls are hardly a reliable guide for how people will behave out in the world, where they face much greater, and often competing, social and professional pressures. Cheating on a dice roll, with few consequences, is a far different decision than cheating on a spouse, or lying about results to a boss.

Still – that 8 per cent . Seems like a good group to interview about the developmental and childhood sources of compulsive lying-cheating syndrome. If they’d come clean, that is. – New York Times

‘The strutting farmer gripped my hand. I could smell alcohol on his breath’
5