Tanya Sweeney: It’s not being bitchy if you don’t lift as you climb; it’s being insecure

Sending the lift back down requires a woman to be at a certain, fairly exalted point in her career 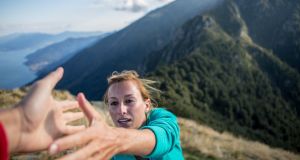 It’s a lovely sisterly concept but sending the lift back down could put yourself at a professional disadvantage. Photograph: iStock

Almost 15 years after Madeleine Albright famously intoned, “There’s a special place in hell for women who don’t help other women,” I learned a new phrase: Lift as you climb. It’s where you make things better for all women and help your peers; making sure that no woman is left behind.

In recent weeks, I’ve heard this sisterly concept crop up in many interviews. On talking to a rising star actor (and separately, a writer) about working with Sharon Horgan, they both had the same effusive praise for her professional generosity. “She sends the lift back down for other women,” was the gist of it. It’s a lovely thing to be able to do. Yet I suspect that sending the lift back down, while also not putting yourself at a professional disadvantage, requires a woman to be at a certain, fairly exalted point in her career. You’re not going to see a younger, hungrier woman as a threat or competition if you’re at the glittering higher echelons of your chosen field.

Years ago, I too sent the lift back down. A young, inexperienced journalist approached me, looking for advice on how to break into paid writing work. All told, I was flattered to be asked, and fancied myself as a sage mentor to an eager young gunslinger. I all but patted my knee invitingly to get the novice to clamber aboard while I imparted what little wisdom I had. In retrospect, the advice was too effective: after teaching all that I knew (that took 10 minutes), I made an enthusiastic email introduction with one of my editors.

Within a year, the younger journalist had not only managed to get a full-time job at the newspaper, they had also managed to oust me out of the regular gig I had there. Were they aware of the usurping? Perhaps they were simply a better writer? As the journalism industry became more precarious and stormy, I felt it more prudent to guard my patch for years. The confidence and ambition of other women frankly unnerved me.

The thing is, deciding not to grease the wheels for younger women in the workplace is seen as bitchy, craven and calculated. There’s a sense that those who pull the ladder up behind them as they climb simply don’t want other women to have it any easier than they did. But no matter what Albright says, it’s got nothing to do with being evil.

Women are conditioned to believe there’s only so much
pie (and power, praise and professional opportunity) to
go around

The truth is, it comes from a place of fear, and from a lack of confidence. Perceiving younger, ambitious types as a threat. It happens because of a scarcity mindset; the sense that you can be elbowed out of the way with next to no effort.

Women are conditioned to believe there’s only so much pie (and power, praise and professional opportunity) to go around. Really, it does us the biggest disservice. It ends up reinforcing bad stereotypes and creating toxic gender barriers. It lets us all down in the end.

Last week, it happened again; another person contacted me for professional advice, thinking they might like to become a journalist. I batted away my initial impulse, which is usually to avoid the scenario by saying something glib like “Try a nice sensible job in the civil service.” Instead, we talked practicalities and strategies, and had hammered out an initial gameplan of sorts. Though I was aware of a low-grade hum of anxiety bubbling within me – I’m insecure enough that I still worry about my patch – it still felt nice to help.

Aminatou Sow and Ann Friedman, hosts of the Call Your Girlfriend podcast, recently created Shine Theory, a healthier counterpart to Albright’s immortal utterance. “We believe that when one of us shines, we all do,” they say. “Shine Theory is recognising that true confidence is infectious. It’s a practice of cultivating a spirit of genuine happiness and excitement when your friends are doing well, and being there for them when they aren’t.”

But a win for someone else isn’t a loss, or a stalling, for you. It doesn’t make your own successes any less likely or
further away

I got to test it out this week when I heard that a good friend was offered a book deal in one of those fabled nine-way-auction six-figure-advance scenarios. I was genuinely thrilled at this, because I’d been aware of the toil and effort that brought her to this good fortune.

Full disclosure: though the news initially made me shriek with joy, I was aware of a pang of something not quite so healthy or positive in there, too. I turned it over and over in my head until I found its true meaning.

It’s possible to be happy for someone’s win in life and feel a little sad for yourself, or maybe even irritated with yourself, at the same time. But a win for someone else isn’t a loss, or a stalling, for you. It doesn’t make your own successes any less likely or further away. The cliché, careworn though it is, bears repeating: keep your eye on your own paper. No matter what dazzling developments are happening in someone else’s life, their paper won’t have the right answers for you.

Nigella Lawson: ‘I feel insecure if I don’t know what I’m going to eat’
7