As the actor jogged topless around London, Lidl asked the Senator to rethink her outfit 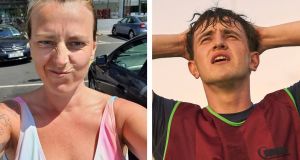 Tops on: Lynn Ruane in the swimsuit that Lidl security objected; and Paul Mescal in Normal People. Photographs: Twitter/@SenLynnRuane and Enda Bowe/Element/RTÉ

You’re probably as sick of reading it as I am of writing about it. Yet in Double Standards for Men number 253 – in a series of about half a billion – comes the curious tale of the swimsuit in a shop.

Senator Lynn Ruane is no stranger to calling out such things, but a tweet yesterday about dressing appropriately in her local supermarket still caused a kerfuffle. She tweeted that she had been pulled aside by a security man at a Lidl in Tallaght for dressing “inappropriately”.

“Lidl wants me to wear a different top to shop there apparently,” Ruane wrote, posting a snap of the offending garment. “As if me wearing a swim suit for a top in the summer is any different to any other little tank top I’d wear. Get a grip. Men walking around in vests showing just as much skin.”

The curious thing is that, near Lynn Ruane’s supermarket, and all over the country, dozens of men are faffing about in their GAA shorts. The nipple has most definitely been freed

Later, Ruane explained: “I had a sarong around my waist to cover the bottom half of my body; it’s not as if I wasn’t covered. A security man pulled me aside. He said next time to dress in a more appropriate top.”

Lidl contacted Ruane not long after to apologise and say it would make sure its staff knew the company’s clothing policy. (It also transpired that the security guard worked for a contractor, not for Lidl itself.) But it does bear asking: what is this policy exactly? Stop making ad-hoc judgment calls on what constitutes “appropriate” apparel on a hot day?

.@lidl_ireland wants me to wear a different top to shop there apparently.

As if me wearing a swim suit for a top in the summer is any different to any other little tank top I'd wear.

Men walking around in vests showing just as much skin. 🙄 pic.twitter.com/Vi5cH6cXkJ

I’m no seasoned style commentator (you can quote me on that, etc), but, looking at the swimsuit in question and totting up the square inches of fabric, it’s not very different from a vest worn by countless women who went through Lidl that day. It just happens to be made of Lycra. Apparently man-made stretchy materials are inappropriate. Shrug.

You have to wonder what the security guard was afraid of. That Ruane was going to attempt a Miss World catwalk routine in the freezer aisle? This is what I like to call a classic “won’t someone think of the childer?” move, making a snap judgment seemingly based on little more than personal bias while gussying it up as some sort of wider concern for others.

The curious thing is that, near Ruane’s Tallaght supermarket, and all over the country, dozens of men are faffing about in their GAA shorts. The nipple has most definitely been freed. In Scotland they call it Taps Aff. In Ireland we call it Anything Over 15 Degrees. Is it a chance to balance out that farmer’s tan or an opportunity to show off that regretful Full Moon Party tattoo? Or, as with heads of government, is it a case of simply catching some sun on a day off? Either way, people don’t feel the need to talk to Joe about it.

Has the Normal People star been told to be more appropriate? Has he heck. He’s turning teeny GAA shorts into a style statement

Certain media outlets have been running daily updates on Paul Mescal “showing off his rippling muscles” as he jogs around London. Taps Aff, naturally. Has the Normal People star been told to be more appropriate? Has he heck. He’s turning teeny GAA shorts into a style statement.

The Lidl matter was neatly resolved, yet the debate found a second wind on Twitter. Many posters expressed support for Ruane, yet the Senator was also subjected to a significant amount of feedback of an entirely different stripe. “Put some clothes on and have some respect” seems to be the main thrust of it. Later, Ruane tweeted that her “heart was heavy” going to bed after reading some comments. “There were some tears this morning,” she admitted.

I get it. Twitter makes everyone a pundit. But surely now is the time to step away from the tweet button and stop telling women what they can or can’t wear. Not because it’s the right thing to do but because commenting on or judging a woman’s attire makes you look like, well, a bit of a creep.

Meanwhile, it’s *checks Met Éireann* 24 degrees in Dublin today. We are just not used to this kind of balmy, bain-marie carry-on. Can we just agree that “appropriate clothing” is “stuff that makes us feel a little more comfortable?”

Faces of the future: Some of the rising stars of Ireland’s black community
6