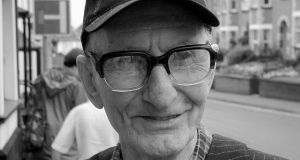 Packie Manus Byrne, who has died aged 98, was a traditional musician who wore the tradition lightly. He was primarily a singer, but also a tinwhistle player and a storyteller. Byrne knew the old songs of his native southwest Donegal, having played with musicians who had grown up in the 19th century.

He could perform equally well on a concert stage or in a small session. He could write songs in the traditional style and he could tell a story, either serious or lighthearted.

Byrne was born in February 1917 in the townland of Corker More, about half-way between Killybegs and Ardara, the youngest of the four children of Connell Byrne, a small farmer, and his wife, Maria (née Gallagher).

At 19 he emigrated to England. There he worked in many jobs, including as a railwayman and circus hand. From time to time he returned to Ireland. During one spell back at home he worked for a cattle dealer and used to walk cattle from Pettigo in south Donegal to Derry, and then accompany them on the boat to Scotland.

In the late 1950s he contracted tuberculosis; the illness cost him a lung.

In the late 1980s he retired to Donegal, where a steady stream of visitors made their way to his home in Ardara. As he aged, he developed breathing difficulties, but he was not the kind of man to let a minor problem like not being able to breathe stop him singing: he changed his style so he could draw breath and continue singing almost to the end.

He is survived by his nephews and nieces.