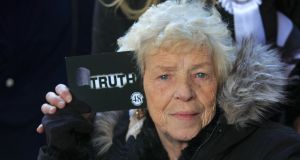 Christine Keegan, one of the leading campaigners for justice for the 48 young people who died in the Stardust nightclub fire in Dublin in 1981, has died.

Christine lost her daughters, Mary (19) and Martina (16) in the fire at the St Valentine’s Disco in Artane which remains the worst fire disaster in the history of the State. Of the 800 young people inside the nightclub when the fire broke out after 1.30am on February 14th, 1981, 48 were killed and more than 200 more were injured, many seriously.

Throughout the years when the campaign flagged and most people were giving up, Keegan remained one of the motivating forces for justice for those who died

Her daughter Antoinette Keegan, who now leads the Stardust Victims Committee, survived the fire. She said that her mother was a “true fighter, a true legend and a true warrior” and “the rock we all leaned on”.

On the night of the fire, Christine and her husband, John – like many other terrified parents of young people at the nightclub – searched frantically for their daughters and were eventually told to go to the city morgue. And while the funerals for Mary and Martina were held the following week, their sister, Antoinette was still in hospital with serious injuries from the fire. Although heart-broken by their loss, Christine and John didn’t tell Antoinette her sisters had died while she remained in a critical condition.

After the Stardust fire, Christine became a courageous and tireless campaigner who attended meetings, protest rallies and annual vigils at the site of the Stardust fire and masses at the Stardust Memorial Park in Artane. Together with her husband she visited all the bereaved families in homes across the north side of Dublin.

Her whole life – and that of her family – was shaped by the tragedy. She sat through the daily proceedings of the Keane Tribunal, held in 1981, listening to the harrowing accounts of what happened on the night.

Inquests into the Stardust fire in 1982 returned explanations as to the cause of death but no verdicts. Investigations into the fire showed that a number of escape routes from the dance hall were blocked and some emergency doors were locked with chains. Despite these findings of safety breaches, there were no prosecutions because of the initial finding of probable arson from the tribunal.

This meant that the relatives of the dead were unable to sue the club owners and operators for alleged negligence. It also caused a lot of heartache as families already grieving the death of their daughters, sons, brothers and sisters, felt someone in their own community was blamed for causing the fire.

In 1985, Christine’s husband set up the Stardust Truth and Justice Committee seeking a fuller picture of what happened on that night. That same year, Irish folk singer Christy Moore was found guilty of contempt of court after releasing the song They Never Came Home about the Stardust fire victims. Moore, who became a friend of the Keegans, continued to support their campaign for justice over the years. Christine’s husband, John – her childhood sweetheart as they had grown up together on Saul Road, Crumlin – died of cancer in 1986.

Throughout the years when the campaign flagged and most people were giving up, Keegan remained one of the motivating forces for justice for those who died and those who lived with serious injuries following the Stardust fire. And in spite of the grief she carried, she was a warm and witty woman who always had a twinkle in her eye.

On the 25th anniversary of the fire in 2006, the Stardust Truth and Justice Committee began again to challenge earlier explanations of the cause of the fire and the subsequent Coffey Review in 2009 removed the 1981 Keane Tribunal conclusion of arson.

In 2018, Keegan was again to the forefront of the campaign which handed over 48,000 signed postcards to the Attorney General calling for new inquests into the deaths at the Stardust nightclub fire

Still unsatisfied with lack of detailed investigations into the fire, the Stardust Truth and Justice Committee continued to seek more thorough accounts of what happened. In 2015, Keegan staged a sit-in protest at the Department of Justice to have the names of her daughters removed from the 2009 Coffey Review and the 1981 Keane Tribunal on the Stardust fire. In 2017, she won the Northside People’s award for all her work on the Stardust campaign.

In 2018, Keegan was again to the forefront of the campaign which handed over 48,000 signed postcards to the Attorney General calling for new inquests into the deaths at the Stardust nightclub fire. In February 2019, Charlie Bird, the RTÉ reporter who covered the Stardust fire tragedy in 1981, unveiled They Never Came Home, a memorial plaque on the Stardust building with the names of those who died in the fire. In February 2020, Bird returned to unveil a new plaque as names of those who died had been misspelt on the original plaque.

“The Stardust fire convulsed Ireland like nothing else. I lived with the story throughout my journalistic career and I got to know the people involved. Christine Keegan’s dogged determination was remarkable. The Keegan family kept the campaign going down through the years,” said Bird.

Although latterly, Antoinette, Keegan’s daughter was more the public face of the campaigning work, Keegan was always there behind the scenes. She celebrated the decision by Attorney General Séamus Woulfe in September 2019 to give the go-ahead for a fresh inquest into the death of the 48 young people who died in the fire.

Following her mother’s death, her daughter Antoinette said, “The one thing she wanted was an inquest and we’re going to have that now so she will get justice.”

Christine Keegan is survived by her children, Antoinette, John, Lorraine, Suzanne, Neville and Damian, grandchildren and great-grandchildren. Her daughters, Mary (19) and Martine (16) died in the Stardust nightclub fire in 1981. Her husband John pre-deceased her as did her grand-daughter, Millie-Ruby.