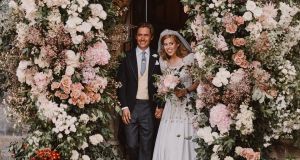 The couple were married in a small family ceremony on Friday at the Royal Chapel of All Saints at Royal Lodge, Windsor, it added.

She wore a vintage Peau De Soie taffeta dress in shades of ivory by Norman Hartnell, on loan from the queen, trimmed with duchess satin and encrusted with diamante.

It appears to be a modified version of the dress the queen wore to the world premier of Lawrence Of Arabia at the Odeon Leicester Square in December 1962 and the State Opening of Parliament in 1966.

She wore the Queen Mary diamond fringe tiara, also on loan from the queen - and which was worn by the monarch on her wedding day.

Buckingham Palace on Saturday released new photographs of the wedding, which show Beatrice and Mr Mapelli Mozzi leaving the church after the service, and the couple with the queen and Duke of Edinburgh.

She was walked down the aisle by her father, Prince Andrew, the Duke of York, Buckingham Palace said.

Prince Andrew’s public life was left in tatters after his disastrous Newsnight interview about his friendship with disgraced financier Jeffrey Epstein, and in the programme’s aftermath he stepped back from royal duties.

The queen described the private family occasion as “very nice”.

The ceremony included two of the couple’s favourite poems, read by their mothers, and a biblical reading — Shakespeare’s Sonnet 116; I carry your heart with me by EE Cummings, and St Paul’s First Letter to the Corinthians.

In an unusual move, the wedding was not announced in advance, the ceremony was held in private and pictures of the event were not immediately released.

In a statement, Buckingham Palace said: “The couple decided to hold a small private ceremony with their parents and siblings following the postponement of their wedding in May.

“Working within Government guidelines, the service was in keeping with the unique circumstances while enabling them to celebrate their wedding with their closest family.”

Beatrice and Mr Mapelli Mozzi had planned to get married on May 29th in the Chapel Royal at St James’s Palace, but the ceremony was postponed due to the Covid-19 outbreak.

Mr Mapelli Mozzi, a millionaire property tycoon, known as Edo, and Beatrice began dating in autumn 2018, and were soon being tipped to walk up the aisle.

The princess, who split from her long-term partner Dave Clark in 2016 after 10 years together, got engaged during a weekend trip to Italy following a whirlwind romance.

Their families have known one another for many years and the couple are said to have started a relationship after meeting again at Beatrice’s sister Princess Eugenie’s wedding.

The ceremony is believed to be the first time the queen and her husband have attended a family gathering since the lockdown. Eugenie and her husband Jack Brooksbank are also thought to have been among the guests.

The ceremony was held at the chapel regularly used by the queen as her place of worship when she is staying at Windsor.

Beatrice, who is ninth in line to the throne, is not a full-time working royal but works for Afiniti, an artificial intelligence software firm, where she is vice president of partnerships and strategy.

Mr Mapelli Mozzi is the son of former Olympic skier Count Alessandro Mapelli Mozzi and Nikki Williams-Ellis, and is a count himself.–PA