David Keenan: 'Music and words are my safety rope' 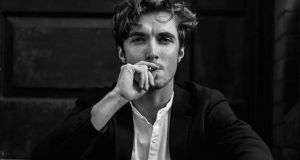 “It has always been a safety rope to pull me out of the bog, music and words,” says Irish musician David Keenan.

Hozier, Damien Dempsey and Glen Hansard are fans of the 23-year-old from Dundalk, whose accent shines through beautifully in his songs.

It’s about being honest with your art, he told Róisín Ingle on the latest Róisin Meets podcast.

“I think if you’re any kind of a musician, storyteller or writer, you have to carry a little bit of where you come from on your breast... especially when I play live. It's about stripping myself bare.”

Keenan turned to music as a child when he picked up his uncle’s guitar while being grounded by his parents “for being a rapscallion”. After school he “fluted around a bit” before joining FáS and despite being what he called “the most uninspiring place on earth,” Keenan ended up honing his song-writing skills while at the state training agency.

Following a six month stint busking outside the Cavern Club in Liverpool, he went viral when a Dundalk taxi driver made a video of him playing his song El Paso in his car and posted it on YouTube.

That song is “El Pasto” now, he said, so on the podcast he played new material only, including the song Young Boy Leaves Home, which he had only written the day before he came into studio.

He also played Nazareth House and the song James Dean, which was inspired by a dream he had in which the actor had come back from the dead and wanted to get a job driving a train for Irish Rail.

You can catch David Keenan live at McKenna's in Monaghan June 8th, John Daly's in Mullingar June 9th and at The Spirit Store in Dundalk June10th.

To listen to the podcast in full, go to iTunes, Soundcloud, irishtimes.com/podcasts, or your preferred podcast app.